Each of these four-cylinder, rear-wheel-drive coupes offers plenty of driver appeal, but which gets your £30k? 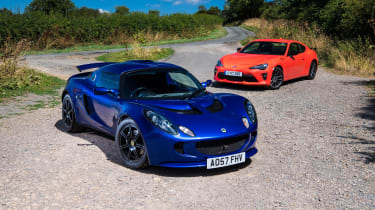 You’ve got just under £30,000 to spend on something fun. Something with two doors, that’s rear-wheel drive, that’ll cope with a trackday or two. At this price you’re spoiled for choice, but at either end of the spectrum you’ll find these two: a new Toyota GT86 and a used Series 2 Lotus Exige S.

On paper, there’s little commonality in this pair. The Lotus may have a Toyota engine, but then the Toyota, essentially, has a Subaru motor. Power is vaguely in the same ballpark, with the Japanese coupe producing 197bhp from its 2-litre naturally aspirated boxer and the Brit making 218bhp from its supercharged 1.8 in-line four. But with an extra 310kg to lug around, the GT86 can’t get close to the 930kg Exige in terms of performance: the Lotus hits 62mph in 4.3sec, the Toyota 3.3sec later. The real connection here is that, despite going about it in extremely different ways, both of these cars appeal to the innate driver in us.

> Read our full review of the Toyota GT86

First impressions of the GT86 suggest Toyota has succeeded in making it a proper driver’s car. You can find the ideal driving position for a start, your bum low, legs stretched out, steering wheel high with arms bent at the perfect angle, and the gearstick close and with a tight action. There’s plenty of room around you, too, and there’s even good visibility. 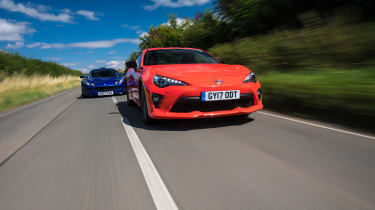 It’s clearly built to a price inside, but those worries evaporate on the move because so much of what you feel mechanically is of great quality. The structure is stiff, the body control tight, and there’s just the right amount of pliancy for the car to be completely comfortable. Even the engine – lambasted as dull and weak when the GT86 was launched – has an appeal after a raft of four-cylinder turbo motors. OK, it’s a little breathy at low revs, but there’s a hollow induction gurgle at full throttle and – praise be! – it revs beyond 7000rpm. The oft-reported lack of grunt isn’t a major issue, either, as there is a far more significant obstacle to overcome before you really feel happy to push the GT86: every time you lean on the car in a corner there’s a substantial delay before front and rear axle dig in and grip, and it’s rather disconcerting.

Experience tells us that so much of this vagueness can be solved by a set of grippier tyres, which will reveal a really sharp and well-balanced chassis, one that feels as though it has been slaved over by engineers who really care about driving. Also, rather than sacrificing that GT86 selling point of low-speed oversteer fun, which never really materialises on the standard Michelin Primacys (in the dry anyway), decent tyres create a car you’re happier to throw around, a car that feels more precise.

Changing the tyres is the thin end of the wedge, as it’s an ideal car to modify. So much of the Toyota’s basics are so well executed, yet there’s still lots you’ll probably want to change. There’s an abundance of tuning options: turbo or supercharger conversions, lowering springs, coilovers, big brake kits, aluminium radiators, roll-cages… the list goes on. All might erode its well-mannered everyday usability, but you can turn the GT86 into a far more serious sports coupe. 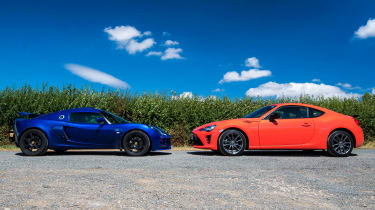 Then you try to insert yourself into an Exige and you wonder why you’d want to sacrifice any of the GT86’s ease of use. The Lotus’s door aperture is narrow in height and there’s a wide sill to clamber over too. All dignity has to be abandoned to post yourself through the slot. Once you’re finally inside and the rigid chair has caught you with a jolt, the Exige feels more premium than the GT86 (most things do). But it’s not because there’s lots of luxurious, well-fitted gadgets, of course, it’s because there’s hardly anything in here in the first place: a steering wheel and gearstick, a couple of dials for the air con and very little else, not even any carpet.

You can’t get as comfortable as in the Toyota – the steering wheel is too far away, there’s no support under your legs and it’s cramped. It’s awkward. But awkward is something you’re going to have to get very used to when owning an Exige. Even changing a front indicator bulb can be a chore, as Rob Good, the owner of this car, explained to us. To get to the back of the light, you have to take the front wheel off. Fine, except the Exige has a completely flat floor, and most of the jacking points are covered by the aero panels. There is a location each side that will lift both wheels if you jack from it, and it’s identified by a blue sticker. If it’s still there, that is…

Greg Lock from Lotus specialist Hangar 111 describes how they’re not for the amateur mechanic: ‘They are straightforward, but set up in a complicated way. In a single job you do touch on quite a few other elements. And most of it’s like keyhole surgery, too, up through small gaps at arm’s length and using endoscopes.’

All the tight packaging and complex set-up is worth it, though. After the Toyota, the Exige recalibrates your perception of how a sports coupe should feel. There’s a familiar chunter as the engine idles, not dissimilar to the GT86’s low-rpm puffing and panting. But that’s where the similarities end because, in most respects, the Exige is the absolute antithesis of the GT86. It’s all about grip and security. Riding on a set of Yokohama AD08R tyres, this Exige feels infallible.

Everything is absolutely alert. The quick steering requires minute inputs to make direction changes, the chassis instantly following every impulse. There’s a little slack in this car’s shift when you first push on the gearstick, but as soon as you work the linkage you find that it’s short, narrow, weighty and accurate. 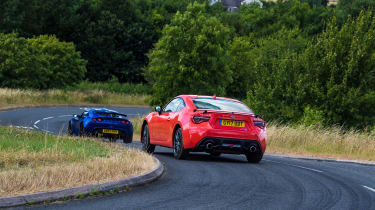 As you use more throttle you hear the supercharger whine, pulling air into the engine. Every corner you go through you feel you’re nowhere near what the Exige is capable of achieving. It may not move and sway like the Toyota, but it communicates absolutely everything that’s happening between car and road.

With such an intense understanding of how the car behaves, you occasionally want for more power. Like the Toyota, there’s an abundance of aftermarket parts available. Exhausts are often replaced (and then changed again for a quieter, trackday-appropriate one), brakes, suspension and supercharger upgrades are all available, too, and if the upgrades are done well, they’ll likely add value to the car. Maybe not covering what you’ve spent, but it won’t harm the car’s desirability.

In Lock’s experience, Series 2 Exiges are less likely to have seen track use than first-generation cars – only about a quarter will have been on a circuit compared to around half of S1s. Cars that have clearly spent a lot of time on track can be bought a little cheaper, but overall prices of S2 Exige Ss are on the rise. Over the past four years Lock has witnessed them increase by about £800 a year, so if this trend continues, the Exige has the capacity to offset some of your servicing and maintenance costs, too.

Both the GT86 and the Exige appeal to the same sort of driver, perhaps just at different stages in their experience. The Toyota’s approachable limits, safe balance and absolute usability make it a great entry-level sports coupe, but to make it the car that many think it should be – or that you might eventually to want it to be – it requires some major tweaks. The Exige, meanwhile, is so right, so serious, so impressive straight out of the box. Its performance is on a totally different level, so it’s a car you need to graduate to, and be prepared to accept more compromises with – but the rewards will make it all worthwhile. 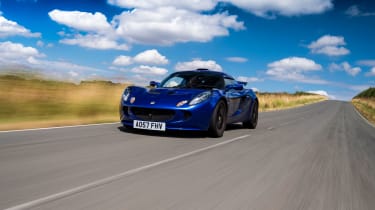 ‘The Toyota 2ZZ engine in the Exige is durable. It lasts because it’s been designed to take high revs for sustained periods, and not many people will do that with them.

‘We’ve had cars that have come in with 140,000 miles on the clock and are regularly used on trackdays. They’re a bit rattly, a little noisy, but the customers keep servicing them, changing the oil frequently, just keep using them and they just keep on going. But if you are using the engine on the upper cam all the time, getting what I’d consider the best of the engine, then yes, they do definitely wear quicker.

‘A lot of people say the camshaft lift pins snap all the time, but in 15 years we’ve only seen one set of these pins that have actually been worn. Even though some cars have shown very similar characteristics to what is described as being lift pin wear, it’s generally wear in the camshafts themselves.

‘Exiges can easily be over-revved on downchanges, because there is an issue with the gear cables. They’re about seven to eight feet long and they go from the middle of the car, past all the heat sources, underneath the gearbox, then back over the top of it. Over time they will stretch. We find that most of the time they can be easily corrected with a brief test drive followed by a couple of adjustments. Or you can say those cables are definitely done and they need changing. It’s not a hard science; there is no perfect way of getting the gearshift to perfectly relate to the internal selectors in the gearbox. It’s trial and error, and it needs a bit of knowledge and experience to get them set up right.

‘Bodywork is not cheap – front and rear clamshells are £3000 to £4000 each. There are a lot of cheap copies out there that don’t quite fit properly. The factory ones are still far and away the strongest, and the best in terms of getting them to look right on the car.

‘It’s important to use a bodyshop that knows and is comfortable with glassfibre, too. Lotuses don’t take well to being baked at all. If you stick them in an oven at 60deg C, the panel that’s just been prepared will come out all lovely but the rest of the car will potentially bubble up, as there can be moisture under the surface of the gel coat that turns into little bubbles if the car gets hot.

‘The worst thing you can do is leave a black car sitting in the sun with a cover over it, but every single colour I can think of, apart from Chrome Orange, is prone to having the paint bubble up.’