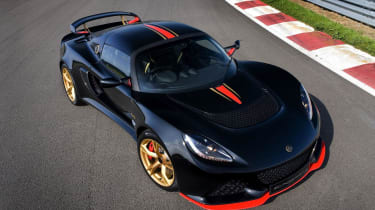 Lotus has unveiled a limited edition Exige to commemorate its long history in Formula 1. Called the Exige LF1, just 81 examples of the V6 two-seater sports car are being produced for global markets outside of the US.

Inside, the theme continues with black and gold leather seats with gold piping and stitching, LF1 logos on headrests and floor mats and Lotus F1 Team logos on the seat backs. For added practicality buyers can spec a convenience pack with heated seats and air conditioning.

Every car will receive individually numbered carbonfibre build plates, each one with a different victory number to celebrate the marque’s 81 F1 wins between 1960 and 2013. The engine will also receive carbonfibre numbered plaques.

Matching this straight line performance is the handling you’d expect from a Lotus, the Exige S’ Race Pack option coming as standard on the LF1. This adds a Dynamic Performance Management system, two-piece high-performance brakes and sticky Pirelli P-Zero Trofeo tyres to give the limited run car an optimised sport set up.