Lotus pulls the wraps off its fastest ever convertible car, the 345bhp, 145mph Exige S Roadster 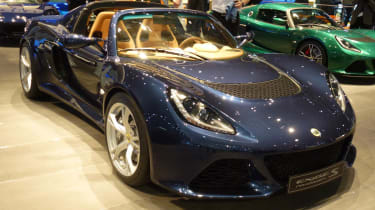 7
Check out our A-to-Z list of stories from the 2012 Geneva Show
Lotus has revealed a new convertible Exige at the 2012 Geneva show. The 145mph S Roadster is the fastest drop-top the firm has ever produced, sharing the same 345bhp 3.5-litre V6 engine as its brother, the Exige S coupe. The Roadster has lost 75kg over the coupe, now weighing in at 1100kg. Despite this saving, the 0-60 time remains at 3.8 seconds. However, top speed is now limited to 145mph, compared to the 170mph of the coupe.

Subscribe today to have every issue of evo delivered straight to you. You'll SAVE 39% on the shop price, and get evo for its original cover price for a whole year!
Subscribe now
This is the first Exige to be offered in soft-top form and similar to the Elise, the fabric roof has to be removed and re-attached manually.
There are a variety of options available on the car, including specifying a more plush comfort interior or a stripped out more track orientated cabin. As well as the interior options, the new Roadster comes with the option of Lotus’s Serial Precision Shift (SPS) automated manual transmission over the standard 6-speed manual unit.
Suspension setup can also be tweaked from its standard road settings, to a firmer, more track-focused setup as part of the Race Pack, which also includes launch control.
Prices and on sale dates are yet to be announced, but it could be a short while before we know either; in an exclusive interview with Lotus boss Dany Bahar at Geneva, evo learned that car development and production schedules have both hit the stoppers due to problems with parent company Proton. More here.
Check out our A-to-Z list of stories from the 2012 Geneva Show
Follow us on TwitterFollow us on FacebookEmail us