Lotus has shown the new V6-engined Exige S at the 2011 Frankfurt motor show, in addition to its Exige R-GT rally car 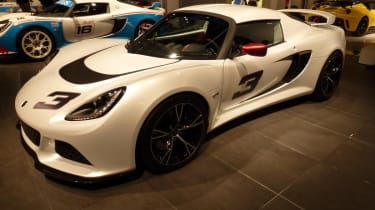 Frankfurt has been another bumper motor show for Lotus, with the sportscar maker’s stand crammed with new and revised models.

Some we already knew about – including the Evora GTE – but others were being introduced for the first time in Germany, with the biggest news being the arrival of a revised Exige S.

The new Exige gets the 3.5-litre supercharged V6 engine from the Evora S, lifting power from 220bhp for the old four-cylinder version to a mighty 345bhp – more than enough to offset the 125kg increase in weight of the new engine. The new car delivers 331bhp per ton (up from 239bhp per ton) – which should be enough to push the Exige’s performance into supercar territory.

Unlike earlier versions of the Exige, this one also comes with a new glass rear screen. That means the end of the car’s trademark roof-mounted air intake scoop, but does mean that the driver does now at least  stand a sporting chance of being able to see what he or she has just overtaken. As before there’s a massive rear wing, claimed to produce even more downforce than the 42kg that the old Exige managed at 100mph.

A three-stage stability control system is standard, with both Touring and Sport settings in addition to full deactivation. An optional ‘Race’ pack adds a fourth mode, Race, which features a launch control system.

No performance figures have been released yet, but you can bet it’s going to be an absolute scorcher. Sales begin later this year and prices will start at around £56,000 - £20K over the previous car.

Lotus also used Frankfurt to give the new Exige R-GT rally car it’s debut. This has been built to take part in tarmac events in the new ‘GT’ class. It shares the Exige S’s 3.5-litre supercharged V6  but has to breath through a 34mm air restrictor that cuts peak power down to around 300bhp, and the car will also carry ballast to meet the FIA’s minimum weight requirement of 1200kg. You’ll be able to see it on selected tarmac stages next year – and its presence at Frankfurt gave the company a welcome excuse to also put a ‘70s Lotus Sunbeam rally car on the stand!