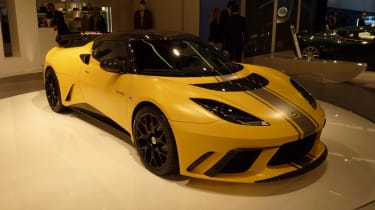 The striking new Lotus Evora GTE is coming to Europe. The sports car company unveiled its hardcore Evora as a 25-off limited edition for the Chinese market, but after the run sold out nearly five times over, production has been upped and expanded to other markets. The production model was unveiled at the 2011 Frankfurt motor show. It’s the most powerful Lotus road car ever, its racecar derived 3.5-litre V6 producing 438bhp, 162bhp more than a regular Evora and 88bhp more than the Esprit V8 supercar which was Lotus’s previous peak performer. The engine is mated to an automated single-clutch manual transmission (dubbed an AMT racing gearbox). Thanks to liberal use of carbonfibre – including bumpers, rear wing and doors – it weighs 1277kg, 105kg less than the standard car, which is hardly overweight in the first place. While there’s little information on the interior at the moment, it will no doubt be sprinkled in carbonfibre too. The front seats are said to be Recaros and we’d be surprised if the Evora’s tiny rear pews remain. Its looks are noticeably inspired by the Evora GTE racer, with the regular coupe’s inoffensive lines replaced by aggression and attitude, new front air intakes, wider hips and that stonking rear spoiler the highlights. Will it turn the Lotus Evora into a Porsche Cayman R killer? Its performance should be on another level, but with a basic Evora S already touching £60,000, the GTE is likely to be a more exclusive, more expensive car altogether. Click here for all of evo’s Frankfurt motor show news