The revised 260 Cup is the most extreme Exige yet, and a seriously challenging road car 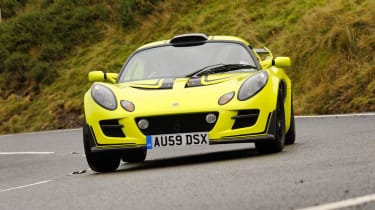 With the Lotus production line busily churning out Evoras, you could be forgiven for assuming development of the established models might have been neglected, but evidently that’s not been the case. Last month the minimalist 2-Eleven GT4 impressed us so much at the Bedford Autodrome that it won our Track Car of the Year title, and now we have this, the 2010 version of the 260 Cup, a lighter, faster, more intense update of the hardcore, race-ready Exige.

Since 2006, Exige Cup revisions have become an annual event, and this time around the engineers have worked on optimising the structure, aerodynamics and handling to take advantage of the 38kg than was shed from the car last year. At 890kg, the kerb weight is firmly in the skeletal category – the new Ferrari 458, for example, tips the scales at 1380kg. Dry.

There is absolutely nothing left inside this Exige that’s just along for the ride. There are no floor mats or sun visors, no cover for the small motorsport battery and even the gas strut for the engine cover has been deleted. It does have electric windows and air conditioning, but these ‘luxuries’ are offset by more extensive use of carbonfibre. Drop into the comfortable, FIA-spec, carbon-shelled seat and you’re surrounded by the stuff. The roof and dash are formed from it, and it’s not the kind of glossy, heavily lacquered carbon you might find incongruously fitted to a ‘sports’ SUV; this is the pure, naked stuff where you can feel the weave as you run your fingers along it.

On the outside, the new ‘carbon chord’ composite rear wing is based on the Exige GT3 concept shown at Geneva in 2007 and is significantly wider, higher and sited further back than the ’09 wing to reduce drag while increasing stability and maintaining the same level of downforce (42kg at 100mph). It gives the Cup a more aggressive look than the previous central-strut version, and there’s another benefit too. Attaching it to the rear bodyshell clam via end-plates has increased rear structural stiffness by 30 per cent, and while we’ve never noticed any slack in the Exige’s rear, this offers a more solid platform for the standard Ohlins dampers to work from.

From the moment you thumb the starter, it’s very obvious you’re in a racer: the engine, with its low-mass flywheel, wakes instantly and tingles behind your ears. Gravel pings off the sills (the small mud- flaps fitted to lesser Exiges have gone) and the ride is predictably firm, particularly at lower speeds. It’s knobbly, almost jarring, not like a Lotus at all – in short it feels like a full-on race car with numberplates. Once the pace picks up, though, ridges and bumps are smoothed out and some of the fluidity we’ve come to expect from an Elise-based chassis returns. It’s never as supple as the standard Exige – the edgy rawness always remains – but it’s not as uncompromising as the in-town toughness would lead you to believe.

It’s a daunting task to explore the handling limits at this time of year when the roads are damp, greasy and cold. At the Bedford Autodrome it took a couple of laps to generate enough heat in the front tyres on the 2-Eleven GT4 to be able to lean on them aggressively, and those same Yokohama A048s are fitted to the 260 via new forged alloys that Lotus reckons are the lightest OE wheels in the world. The fronts are just 5.65kg each, the rears 7.75kg, and together they save 800g over last year’s wheels. Well, every little helps.

When we tried the previous incarnation of the Cup (issue 128), the factory had dialled in a noticeable amount of roll in an effort to help the lightly grooved rubber. That’s not present here, although with the virtually limitless adjustability (there are 60 compression and 22 rebound settings, and ride height can be altered by 10mm) you could reintroduce it. As a consequence, on-limit handling around the Horseshoe Pass in North Wales in November was a knife-edge experience that required a measured approach and sensitive hands.

As you’d expect from any Lotus product, the level of detail fed though the thin-rimmed steering wheel allows you to judge what’s about to happen before it does. The brakes – AP Racing calipers and 308mm discs up front, 282mm discs clamped by Brembos at the back – react hard and fast the moment you brush the middle pedal, but you need to develop a subtleness to the way you build up the pressure. There is an ABS safety net, but stomping on them goes against the grain; every aspect of this car requires a light touch to get the best from it.

Get into the turn and the nose will slide first – this comes as no surprise as it’s very light up front. But if you have the space and nerve to keep your foot in, it will ultimately snap into oversteer. When it does, your reactions need to be precise and rapid, for this is no lazy drifter; driving over the limit of adhesion cannot be taken lightly. There is a variable traction control system, but in these conditions it can’t react with the necessary speed or deftness, even on its most helpful setting.

The alternative technique is to lift the moment the front tyres lose their purchase on the greasy tarmac so that the bite comes back. Pick up the throttle now and it’s possible to neutralise the balance, but stab at it and rapid counter-steer is again required. It’s a very small window to work in. That said, you’ll still be covering the ground at an astonishing pace and if you can keep your concentration and you’re up for a challenge the adrenalin rush from running this gauntlet soon becomes addictive. In the summer months, when you can get proper heat into the specialist rubber, it’ll probably feel completely different.

The engine performance would be the same though, which is to say, explosive. The Eaton supercharger mated to the 1796cc Toyota four helps deliver 256bhp in an astonishing swell of noise and force. There’s a useful amount of torque low down, but the thrust really begins above 4000rpm as the charger gets fully into its stride. The whine is as brash and loud as this car’s colour scheme, and right at the top of the 8000rpm rev-range, when three red ‘O’s blink on the dash, there’s a dramatic final kick so extreme you’d swear it was about to blow itself into smithereens. It doesn’t, so you slice through to the next ratio and do it all over again. Lotus reckons on a 4sec 0-60mph time, and there’s a launch control system to ensure you can achieve it any time you want.

You’re left in no doubt that this is a proper, hardcore Lotus that would transfer effortlessly to the race track and prove successful with little or no modification (there’s a roll-cage built into the bulkhead behind the seats), but it’s the road manners that concern us here. The 260 Cup is uncompromising – it never lets up, there’s no time to relax and it won’t suffer fools – but the upside is that it’s constantly engaging and intensely involving, asking more of the driver than any previous Exige. It’s a cerebral rather than physical car to drive hard and, if you’re up for it, it’s truly satisfying.

Lotus is on a roll right now. It has produced some of the greatest cars of 2009, and on this evidence 2010 could be equally successful.