Lotus prices and specs up its new Exige S Roadster. It's the fastest Lotus convertible yet 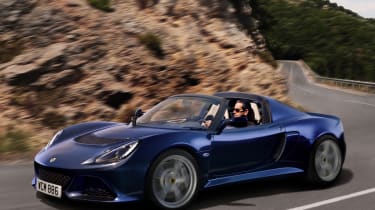 Lotus has revealed firmer specs and details of its new Exige S Roadster. The drop-top joins the Exige range wearing the same £52,900 price tag as its coupe sibling, swapping the hard-top’s wild rear wing and front splitter for a manual folding soft-top, retracted in ‘two clicks and a roll’ according to Lotus.

Unusually for a convertible variant, The Exige Roadster is lighter than its closed counterpart, albeit by just 10kg at 1166kg.

It shares the coupe’s mechanicals, its rear wheels driven by a mid-mounted supercharged 3.5-litre V6 which is linked to a six-speed manual gearbox. Power and torque are rated at 345bhp and 295lb ft, enough to whisk the Exige to 60mph in 3.8sec, identical to the coupe’s sprint time. The Roadster’s top speed is lower though, dropping 25mph to 145mph.

Lotus’s IPS paddle-shift transmission isn’t yet an option but could appear if demand is high enough. A quilted leather interior lies exclusively on the Roadster’s options list.