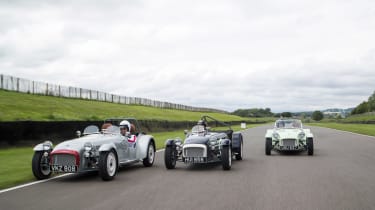 Caterham has launched a new limited edition Seven called the SuperSprint at the Goodwood Revival. Based on the three-cylinder Seven 160, which we already love, the SuperSprint is available in six unique retro-inspired liveries and will be limited to only 60 units for sale in the UK and Europe.

As well as the special paint, SuperSprint Sevens receive an upgraded 95bhp (standard cars have 80bhp) three-cylinder turbo engine connected to the rear wheels via a limited-slip differential. The suspension has also been sharpened up with an adjustable ‘race inspired’ set up.

Inside, Caterham has fitted new quilted leather seats trimmed in Innes tan leather from Scotland no less, and will replace the full windscreen with individual aero screens for the driver and passenger if they are specified. If you so wish, Caterham will also remove the passenger seat to make the Seven SuperSprint a single-seater. 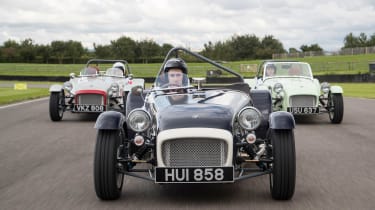 Outside, the retro-inspired features continue, with a Le Mans-style mesh grill and side intakes, along with six unique retro-inspired liveries that combine a full body colour with contrasting grille lip and wheels.

Limited to 60 units, the SuperSprint follows on from a similar special edition Caterham Seven that was launched at last year’s Goodwood Revival. That previous special edition turned out to be the fastest selling Caterham ever, putting this new model in pole position to be another commercial success for the small British marque.

Available to order straight away, the Caterham Seven SuperSprint is priced from £29,995, making it around £12k more expensive than its more basic Seven 160 donor car.