Wider body joins the options list, while a windscreen is now standard 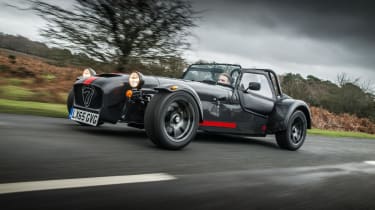 At 508 horsepower per ton, there are very few performance-related things the Caterham Seven 620R can’t do.

It’s not the most practical of vehicles however, which is why Caterham has introduced an ‘S’ Pack for the car, creating the Seven 620S.

As with other Caterham models, the S Pack gives the 620 a more road-biased setup. There’s a full windscreen for a start – always a satisfactory nod towards practicality – and a heater. It’s also supplied with a hood and side screens (rudimentary, but welcome) and leather seats.

The springs and dampers are also set up for better compliance on the road, though Caterham has retained the 620R’s uprated brake master cylinder and limited-slip differential.

Also standard is the 2-litre, 310bhp variant of the Ford Duratec four-cylinder (and 610kg kerb weight) that endows the 620S with its impressive power-to-weight ratio.

There’s a five-speed manual transmission attached to it, rather than the R’s sequential transmission, and a lightweight flywheel helps the engine spin to its 7700rpm power peak. The result is a 3.44-second 0-60mph time, and 145mph top speed.

Optional for the first time is the wide-bodied S5 chassis, for £2500. Both wider and longer than the standard car, Caterham diplomatically describes it as better for the ‘more generously-proportioned’ customer, though it’s also the one to go for if you want a little extra luggage space and greater fuel range, thanks to a bigger tank.

Other options on the S include carbon seats like those in the R – for £600 – or £995 for heated carbon seats. The rest of the interior is standard R, including its carbonfibre interior panels.