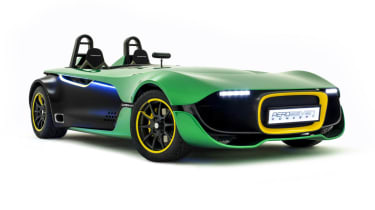 Caterham Cars unveiled its AeroSeven Concept ahead of the weekend’s Singapore Grand Prix, with a production version due to go on sale in Autumn 2014. With significant influence from the Caterham Group’s business arms, the AeroSeven Concept also gains from a wealth of knowledge and technology available from the company’s F1 racing team.

This new model, although based on an updated version of the Seven CSR’s chassis, includes a number of firsts for Caterham. With influence from the company’s Technology and Innovation division (CTI), a new Caterham Engine Management System enables brings the first fully adjustable traction and launch control functionality fitted to a Caterham production car.

Its lightweight carbonfibre body, crafted in the F1 division’s wind tunnel and using its Computational Fluid Dynamics technology, received design input from the racing team’s performance director, John Iley, as well as the CTI design team. The shape is still being developed, with engineers working to increase downforce and reduce drag.

Providing power to the AeroSeven Concept is a naturally aspirated 2-litre Ford Duratec engine. Linked to a six-speed manual gearbox and driving the rear wheels, the four-cylinder unit produces 237bhp at 8500rpm and 152lb ft torque at 6300rpm, enabling the 635kg AeroSeven Concept to complete 0-60 in under four seconds. Although the power source of the production car is still yet to be confirmed, the Concept’s engine seems very likely.

The AeroSeven Concept sets the tone for a new direction of car development at Caterham. With a launch date set ahead of the company’s all-new sports car being developed in conjunction with Renault, the new car hints at the brand’s efforts to increase the speed at which its cars enter the market. It also signals at a future of Caterham cars receiving a larger input from the company’s racing and business divisions. An SUV has been hinted at in Caterham’s future.