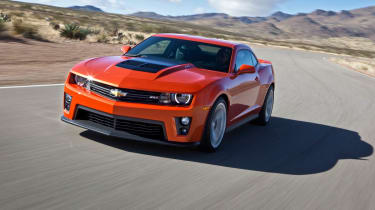 What is it? Chevrolet’s super-Camaro, the ZL1. While it lags behind the newly launched 650bhp Shelby Mustang GT500, it’s still in supercar territory with 580bhp on tap – more than a Ferrari 458 Italia or Lexus LFA. Technical highlights? The supercharged 6.2-litre V8 engine is shared with the Cadillac CTS-V, but here it has a reworked air intake and an active exhaust system borrowed from the Corvette ZR1. Everything touched by its power is modified from the standard Camaro, or unique in some way. Highlights include a beefed-up rear differential and CV joints, plus unequal-stiffness half-shafts to prevent wheel-hop under hard acceleration. The brakes are by Brembo, with six-piston calipers squeezing the two-piece front discs.  All the aerodynamic changes on the ZL1 are functional, resulting in net downforce at speed. The centre bonnet bulge, made of carbonfibre, covers the top-mounted intercooler and also extracts air from behind the radiator and pulls it up and over the body. Underneath the car a flat belly-pan finishes in NACA ducts that direct air to cool the transmission. The front grille, reminiscent of the Transformers Bumblebee, hides brake-cooling ducts in the outer edges of its lower section. On the suspension front, the ZL1 comes with third-generation magnetorheological dampers with two driver-selectable settings. This latest iteration of the system uses two small coils instead of one large one to create the magnetic field that aligns and thickens the ferrous damping fluid, resulting in a faster field dispersal and better control. These new units react 1000 times per second – more than fast enough to stiffen up the car’s front end under braking. What’s it like to drive? All of this work is toward the singular purpose of making the Camaro ready for a full day at the track, straight out of the box. The only performance-related option on offer is a six-speed automatic transmission, and it too has been modified to run lap after lap. Chevrolet says the two-pedal car reaches 60mph from rest a tenth of a second quicker than the six-speed manual – 3.9sec rather than 4.0 – and tops out 4mph faster, at 184mph. But the manual is better to drive, plus it adds launch control and a trick ‘no-lift shift’ function that allows you to keep the throttle pinned on upshifts without the revs rushing for the limiter. The ZL1’s Performance Traction Management system has five settings, which loosen up traction and stability control boundaries in incremental steps. In its final setting, Race, intervention is near impossible to detect unless you make a deliberately stupid manoeuvre. Turn everything off and the ZL1 proves amazingly easy to drift. The car has a neutral balance, bordering on oversteer, and the only downside to the higher limits is that they highlight a lack of support in the flat seats. On track the ZL1’s sharpness might surprise even an M3 owner. On the road, the Camaro’s aircraft-carrier width is more of a problem than on track, but otherwise the ZL1 is easy to drive in traffic and rides comfortably over long distances. Chevrolet has managed to turn the Camaro into a proper GT car. How does it compare? Its fiercest foe in the latest round of muscle car wars is that new GT500. In the States the ZL1’s 54,995 USD (c£35,600) base price is an impressive power-per-dollar deal, although buyers in the US have to pay a 1300 USD gas guzzler tax (double that for the auto), while the Shelby GT500 dodges the fuel consumption surcharge. It’s a shame, really – the Shelby beats the ZL1 in nearly every numerical category, but don’t let that fool you into thinking this Camaro isn’t one of the very best cars in its class.  Anything else I need to know? Sadly, its chances of coming to the UK are ‘less than 50:50’ according to Chevrolet. We’ll have to prove an appetite for imports of the less powerful SS before it will even consider bringing the ZL1 over here.