Citroen has announced that its DS model range will become a separate brand, showcased here in the new Divine DS concept 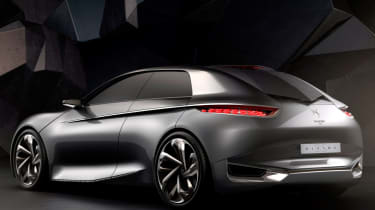 Citroen has confirmed that the DS badge, attached to the nose of more than 500,000 Citroens since 2010, will now be reborn as its own separate brand. Unveiling the Divine DS concept, the new car is the first from the new division and created to represent the brand’s future.

The concept suggests we can expect to see a more ambitious approach to design from DS, with the Divine’s futuristic exterior and space-age interior seeming to take French design to experimental levels. Angular laser headlights join a gaping grille, with swooping bonnet lines leading into a curving roof line and abrupt rear end. The nose almost seems to borrow hints of Audi, whilst the rear almost looks like an Alfa Brera that’s returned from the year 2050. That makes for an exterior that looks cold but undoubtedly cool.

Measuring in at 4210mm in length and 1980mm in width, the compact Divine is shorter and wider than a Citroen DS4 giving it a sportier stance. It places the driver low to the ground too, suggesting the driving experience will be more involving than what we’re used to from Citroens of late.

Inside, design appears equally as ambitious. Large smooth surfaces accompany leather seats that look like they’ve come straight out of a luxurious spacecraft. The dash twists elegantly into the centre console, apparently sacrificing passenger space for aesthetics, whilst visibility is sacrificed with a lack of rear window. DS claims that the interior represents ‘hyper-typage’ levels of customisation, which when translated into non-marketing talk means pretty much every surface is customisable.

That means you don’t have to opt for the expensive looking metal colours and can opt out of the flash Swarovski crystal details, instead choosing your own surface textures to coat the interior. The dash also features gemstone toggle switches and a digital clock set into stone, whilst tech highlights include a reversing camera, touchscreen monitor and holographic display.

Under the bonnet is a 270bhp 1.6 THP engine, appearing to be borrowed directly from the Peugeot RCZ R. In that the engine’s character requires you to rev high up into the rev band, making for a rewarding experience that requires the gearbox to be worked hard. In the hot Pug 0-60 takes 5.9sec and the top speed is limited to 155mph, so we could expect the Divine to possess similar performance figures.

Though the concept reveals little more than design influences for future cars, it does at least confirm the DS brand will be a more premium segment of the PSA auto tie up. With that in mind, we can assume a production version of the Divine DS will be priced to compete with a well specced BMW 1-series and Mercedes A Class, suggesting it’d sell for over £25,000. That’s assuming those crystals don’t make it to production…

Unveiled in Paris the Divine DS concept will be displayed at the Chantilly Concours d’Elégance style event on 7 September, before travelling to the Paris Motor Show from 2 October.