Citroen reveals its latest DS, the new DS5, at the 2011 Shanghai motor show 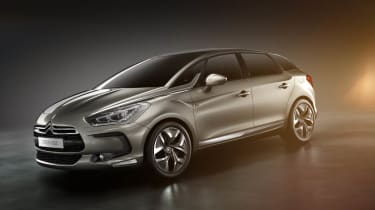 This is Citroen’s latest DS Line model, the DS5. It will be unveiled at the 2011 Shanghai Motor Show, and combining a sleek, compact body, coupe-like driving position, and Sportwagon-esque boot. Under the stylish body the DS5 has a thoroughly conventional flavour-of-the-month hybrid system, as promised from the outset of the DS range. The Hybrid4 powertrain (the same as that in the Peugeot 3008 and 5008) mates a conventional diesel engine to electric motors, providing 200bhp and all-wheel-drive a 163bhp 2-litre HDi engine on the front axle and a 37bhp electric motor at the rear. Fully electric, emission-free city driving is a possibility while there’s a headline CO2 output of 99g/km; not bad for a pretty big crossover vehicle. The DS5 casts a 3-Series sized shadow on the road but looks the most imposing of the DS concepts to date, with a low swooping roofline arching into the sheared off rear, complimented with an Audi A2-alike spoiler bisecting the rear window.  The front end gets angular, intricate headlights, the now-familiar trapezoidal grille and the full width chrome grille with integrated Citroen chevrons. Citroen calls the chrome flourishes that rise from the headlight to the A-pillar ‘sabre inserts’, while the foglights nestle in faux- air intakes similar to those which adorn the DS3 supermini. Aggressive body creases adorn the flanks, while the production model will be available with substantial 19in wheels (though sizes from 16in will be available). The ‘White Pearl’ Edition DS5 to be exhibited at Shanghai will feature 20in alloys. Inside, the DS5 looks production ready. There’s a head-up display and engine start button, while the attractive leather dashboard sweeps down towards sculpted seats, something Citroen calls ‘watchstrap’ design. The airy cabin is topped by a panoramic glass roof, and a 465-litre boot equals BMW 3-Series Touring capacity. With the DS3 and DS4 making production almost unchanged from their concepts, expect to see a DS5 just like this concept on sale in the UK in early 2012, prices kicking off north of the Citroen C5 at around £25,000.