Chevrolet tests the 2014 Corvette Stingray at the Nurburgring and Dudenhofen 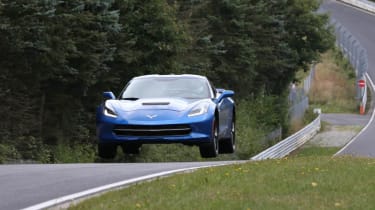 2
It looks like Chevrolet has entrusted the Germans to fine tune the 2014 Corvette Stingray. Chevrolet Europe has released a video of Patrick Hermann (Chevrolet Europe’s Technical Manager) testing the new car on the Dudenhofen proving ground in Germany, as well as pictures of the car leaping and diving around the Nurburgring.

The new Corvette’s 6.2-litre direct injection V8 engine produces 455bhp at 6000rpm, with a whopping 460lb ft of torque available at 4600rpm, though both figures climb by five if you specify the optional Z51 performance pack. This enables the Stingray to complete 0-60 in 3.8sec, on its way to a top speed of around 190mph.