Everything about the Bugatti 16C Galibier is outsize, including its projected price tag. We were there when the wraps came off 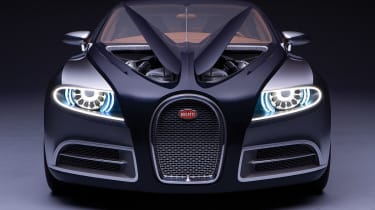 So, if you’re Bugatti, what do you do after you’ve bolted together the very last Veyron in a couple of years’ time? Simply pack up shop and call it a day? Produce an even faster Veyron successor, if such a thing is possible? Perhaps go in the other direction and build a half-price, sub-Veyron supercar instead?

It’s this dilemma that has been troubling Bugatti personnel ever since they first revealed the Veyron. Every time I’ve met up with them over the last couple of years I’ve been shuffled into a corner at some point and asked the same question: ‘What do you think we should build next?’

There was a time earlier this year when it looked like the decision would be taken away from them. Had Porsche managed to complete its audacious take-over of the Volkswagen group, Wendelin Wiedeking (the Porsche CEO at the time) had made it quite clear he would close Bugatti. He saw the Molsheim marque as a loss-making nuisance, which VW could happily survive without.

Thankfully, this never came to pass. Talk of a Porsche take-over faded as the financial storm hit Stuttgart hard – so hard, in fact, that in the end the reverse happened and it was Volkswagen that bought Porsche. Which left Bugatti designers free to continue with the task in hand – completing the development of a four-door Bugatti concept.

The result is the 16C Galibier. And if, as seems likely, it gets the go-ahead, it will mark the start of another chapter in Bugatti’s turbulent history.

It’s worth remembering that Bugatti has been here before. The Veyron is only the second mid-engined supercar that it has ever produced (the EB110 being the first). On the other hand its back catalogue is postively littered with four-seaters, so it was only natural that it would revisit this sector again. It helps that four-door super-saloons are all the rage right now, especially in those areas of the world where the car market is still expanding, namely China and India. Whether they have an appetite for £1m super-saloons is yet to be answered.

Bugatti supremo Franz-Josef Paefgen’s brief to his design team was simple: create the ‘most elegant, fastest saloon in the world’. The 16C Galibier certainly has presence, and not just because it’s a whopping 5.37m long. But Dr Paefgen is also keen to stress that the Galibier has been designed for driving and not just for ‘gliding’, in the way the Maybach or Roll-Royce might be perceived. He fully expects potential Galibier owners to sit up front and enjoy the driving experience for themselves. Unlike in the Veyron, though, they’ll be able to sit either on the left or the right; Bugatti doesn’t want to limit itself to selling the car in LHD markets this time around.

To make life interesting from the driving seat, Bugatti will continue to use the same power-crazed W16 engine that it developed for the Veyron but this time fitted with twin, dual-speed superchargers, designed to give even greater boost at low revs than the quad turbos do in the Veyron, while still allowing the engine to reach close to 900bhp at the other end of the rev scale. Bugatti is keen to enhance its reputation for building cars that set new standards of performance, just as the Veyron has done in the supercar sector. At the launch of the Galibier, engineers were being coy about the figures, but expect a top speed well north of 220mph, possibly as high as 240mph, while 0-60mph should be over in less than 3 seconds (helped by the traction provided by the four-wheel-drive transmission off the line).

Swapping to superchargers neatly side-steps a lot of the cooling problems associated with the Veyron’s quad-turbo set-up, which, behind the scenes, caused such headaches that they delayed the launch of the Veyron by as much as two years. The front (rather than mid) mounting of the engine makes cooling easier anyway, but it’s still a significant step in engineering terms to change from turbos to superchargers.

Attached to the rear of the W16 engine will be an automatic gearbox but the exact specification is, according to the engineers, still to be decided. It seems Bugatti could well fit a revised version of the eight-speed gearbox found in the Veyron but engineers hinted that they are working on a new version which would give the car even greater refinement. Apparently the revised internals use individual torque converters to swap gears, rather than a dual-clutch system as found in the Veyron.

Climb inside the Galibier and if you’re not knocked out by the suffocating whiff of leather hitting you from the moment you enter (even the floor is covered in leather) then the view that greets you from the driver’s perch will render you speechless. Dominated by a single swathe of beautifully crafted, veneered wood, stretching all the way from A-pillar to A-pillar, the dash is punctuated by just two dials. One shows speed and is calibrated up to 243mph; the other displays engine power being used, the final marking being at 800bhp, although, tantalisingly, the calibration continues beyond and finishes only once 900bhp has been breached.

The driver grips the same steering wheel as found in a Veyron but that’s about it for carry-over parts between the two cars. Just behind the wheel is an all-new LCD which can show a multitude of driver information screens, from bar charts for monitoring various engine functions to sat-nav duties and even night vision displays. Gear-changing is taken care of by a series of buttons laid out in a line along the middle of the huge centre console, which runs all the way to the rear compartment and neatly dissects the two, individual rear seats. Behind the rear passengers lies another surprise – the Galibier is in fact a hatchback, so the boot is quite large and reinforces the notion this should be a usable car.

While the interior of the Galibier seems a very fine place to be, the exterior doesn’t look quite as cohesive at first glance. But look closer and you start to uncover some beautiful detailing that begins to win you over. The first thing to consider is that this is an all-carbon car, the whole structure being based on an inner carbonfibre shell, offering immense strength and the lowest possible kerb weight. The front, rear and roof panels are also carbon, finished off with nine layers of beautifully applied lacquer, with a subtle hint of blue to show the visible carbon weave at its best.

So it was a pity that the show car had the optional polished aluminium for the doors and front wings as they make the shape appear rather fussy, as well as impossible to photograph properly. Around the concept were smaller models of the Galibier, showing alternative paint finishes and all looked better to my eyes than the full-size concept. Still, the impact that the overall look of the car makes on potential admirers is immense. Particularly striking is the ridge running down the centre-line of the car, a brilliant, modern interpretation of the distinctive fin found on the beautiful Bugatti Type 57 coupe from the ’30s. Ditto the twin engine hatches, cut into the bonnet either side of the central ridge. They lift electronically via a remote control and are a delightful modern twist on the engine covers found on cars from the pre-war era. Incidentally, for ease of servicing, the whole nose of the car can be removed so access to the mechanicals is as near perfect as it’s possible to be.

No matter how elegant it all seems, whether the world needs another 1million euro Bugatti is highly debatable (insiders hinted the Galibier would have a list price around 10 per cent less than the Veyron). That’s why this car is about to leave on a tour of the world’s moneyed hotspots. Bugatti wants to be absolutely sure that building this car is the right thing to do. If it does get the green light, then production would be strictly limited to just 300 units and wouldn’t start until after all the planned Veyrons have been built (expected to be late 2012) as there’s no room to produce both cars at the tiny Bugatti factory in Molsheim.

Will it get built? Well, I’d rate its chances at about 80 per cent at the moment; to score 100, I think Bugatti needs to make the exterior more radical. Get that right, and price probably won’t be an issue. Dr Paefgen told me he thought the Veyron had done a superb job of re-establishing the Bugatti brand and, with its next car, they would need to build on this success by continuing to build ultra-exclusive cars for the fortunate few. And, bizarre at it may seem, price isn’t such a major factor at this end of the market: if you’re prepared to pay 1million euros for a car, then paying 1.2million is a mere squiggle of the pen away come cheque-signing time. The point is, that little bit extra would help pay for a more daring exterior to match the fabulous interior.

Recently, Bugatti held its centenary celebrations at the factory and revealed the Galibier to the biggest gathering of Bugatti owners ever assembled in one place. According to Bugatti’s sales director, Alisdair Stewart, Veyron customers were enthusiastic for the Galibier, some even offering to put down deposits there and then.

But the real test will come when buyers who know nothing about Bugatti (but have plenty of disposable cash) see the car for the first time. Unsurprisingly, the world tour kicks off in China, where I suspect Bugatti will very quickly discover whether the Galibier is the right car with which to replace the mighty Veyron. Or not.

The Galibier wouldn't be the first mega-expensive Bugatti four-seater. Back in 1929, the French company launched the Royale (last image, above), or type 41 as it was known. It was to be the ultimate Bugatti, designed to appeal to royalty, so they could wave at their loyal subjects in style. But was it the most expensive Bugatti of all?

You bought a Royale in two parts: a chassis first, then you commissioned a coachbuilder to craft you a suitable body. In 1933, the basic cost of the Royale chassis was listed as £5,250, ex-works.  Your fancy bodywork, according to reports of the time, would cost you close to £1500.

Therefore, a complete Royale would set you back around £6750 all told, which, allowing for inflation between 1932 and now, would be £341,000 in today’s money. Compared with the £1million Veyron or the Galibier then, the Bugatti Royale turns out to be a bit of a bargain.