We look through some of our favourite road going homologation specials

Homologated road cars have long been held close to our hearts at evo. Created with the race track or rally stage in mind, these subtly modified cars bring a flare of competition to otherwise run-of-the-mill models.

There are dozens of homologation specials to choose from, but below, we remember four of our favourites. Which car would you add to the list? 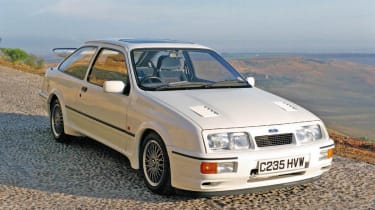 In 1987 Ford Motorsport wanted to produce an upgraded version of its Group A Sierra RS. Working with Ford’s road car team, the race department modified the already potent RS to create the Sierra RS500.

As soon as it left the pit lane the RS500 outperformed its pre-upgrade predecessor, taking 40 outright Group A wins. Its turbocharged 2-litre engine was tuned to produce as much as 500bhp, securing it a place right at the top of the touring car racing hall of fame.

Admittedly, the road car produced less than half the power of the racer, but its 224bhp output still represented a substantial 20bhp gain on the standard RS, enabling the RS500 to reach 153mph.

The main reasons for this power hike came from a new Garret T31 turbo and a larger intercooler. The RS500’s 2-litre also featured a thicker block to improve race durability, new fuel rails and a higher flow fuel pump.

Ford then added a second set of rear suspension pick-ups to enable the race team to add more negative camber on track. A new rear spoiler with a lower plane was also added to generate more downforce, while new bonnet vents and a cleaned up front splitter helped improve cooling and aero-efficiency.

When the Alfa Romeo 155 Silverstone arrived in 1994, it generated a lot of controversy. The reasons all revolved around the Silverstone’s downforce generating front splitter and rear wing.

Technically, Alfa Romeo’s decision to supply its 2500 road going 155 Silverstones with modifiable front splitters and rear wings was enough to homologate the racer. But that didn't stop rival teams in the British Touring Car championship from protesting. Their reason? The road car's wing and splitter needed to be modified (with supplied fitting kits) to achieve their homologated states.

Gabriele Tarquini in his BTCC Silverstone

Though the effects of the adjustable rear wing and extendable front splitter were negligible on the road car, they provided the racer with a significant advantage. The results were plain for all to see: Alfa Romeo’s 155 Silverstone stormed to victory in its first five races.

Unfortunately, though the race car devastated its competition, the road car’s 1.8-litre Twin Spark engine produced just 129bhp. So while the Silverstone touring car battled its way onto the podium, the road cars were far less potent.

It sat on wider BMW Motorsport wheels and stiffer front suspension too, and utilised an x-brace and strut-brace to reduce flex. BMW also upped the compression of its 3-litre straight-six to 10.8:1, and fitted a new camshaft.

350 GTs were initially produced, all in left-hand drive. Just 50 right-hand drive cars were then produced for the UK market, with these cars gaining the name GT Individual. Some readers may remember that evo's Jethro Bovingdon once owned one of these ultra-rare Individuals.

As its name suggests, the Lancia Delta HF Integrale Evo II was the second evolutionary generation of the Integrale. As one of the most successful cars to grace a World Rally stage, the Integrale was, and still is, a rally icon.

In Evo 2 form, the Integrale’s turbocharged 2-litre produced 212bhp – up from the Evo’s 207bhp – and could accelerate the four-wheel drive hatch from 0-62mph in 5.7sec.

Though the WRC Intergrale had already won 46 rallies and a achieved a record breaking six World Championship wins, by the time the Evo 2 arrived in 1993, the Group A competition proved too strong and the Lancia’s dominant era came to an end.