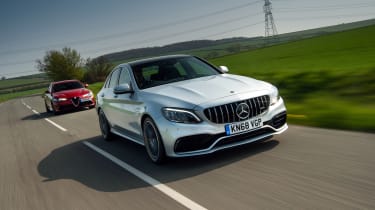 You see it in sport, you see it in art and I’m sure you see it with cars. People, or the objects they create, only being truly, fully appreciated retrospectively. Sometimes a sportsperson makes winning look too easy or they are so dominant that people lose interest (Loeb, Schumacher). Sometimes someone is unlucky enough to be competing in the same era as someone even better, so their own remarkable talent doesn’t get the praise it deserves (several pros playing golf between about 1997 and 2014). Sometimes people are creatively too far ahead of the curve for the public to appreciate (Van Gogh). Sometimes cars are seen as too expensive at the time, even though later people can’t get enough of them as their genre-defining qualities become clear (original BMW M5).

Now, I’m fairly sure that this wasn’t the first feature that most of you turned to in this issue. Understandable. These are saloons not svelte sportscars and both look very familiar (even if the Mercedes is a new facelift). What’s more they look slightly bereft without a BMW in their midst. An M3 is the benchmark and regardless of its eventual position on the podium it’s somehow the reference around which the other smallish sporty saloons orbit. They are destined to live in the class the M3 has defined and, as a result, often reside in its shadow.

But released from the distorting gravitational field of Munich’s propeller badge the Alfa and, perhaps to an even greater extent, the Mercedes take on greater stature. Driving them both over the course of several days and on myriad highways and byways it seemed to me that these are cars deserving of real reverence right here, right now. They are not just good, they are truly great and we shouldn’t leave it to retrospectives in years to come when batteries are ruling the road to realise that. 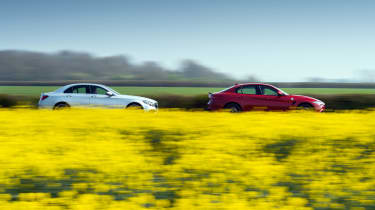 What we have in this pair is the sort of pedigree that even the M3 can’t claim (nor Audi’s RS4 for that matter), because both these very practical saloons have not only monstrous power but genuinely strong links to supercars. The Quadrifoglio can claim the hands of Ferrari engineers in its gestation, while the Mercedes has essentially the same bombastic engine found in the mighty AMG GT R. That’s some pretty damn cool DNA and as automotive objects to appreciate I think it puts them right up there in the higher echelons of desirability.

Anyway, the curious thing I found when hopping from one to the other is that despite some very similar numbers, these two merit appreciation in rather contrasting ways when you’re driving them. Both send 503bhp to the rear wheels and claim to accelerate to 62mph in about four seconds but they feel quite different from behind the wheel.

In fact the distinctions start before you even get into them because although both have a similar four-door saloon silhouette, the Mercedes looks like it has gone down the Q car route when it is parked next to the beautifully muscular Alfa. In the brief glance that you give it before drinking in the positively salacious lines of the Giulia you could mistake the AMG for a common-or-garden C180. Some might say that this adds to its appeal.

Open the doors to the two cars, however, and there’s a startling volte-face in the attention-grabbing   stakes. The Alfa has its lovely large aluminium paddles but otherwise it is the Mercedes that steals the show. With its tiny track pads on the steering wheel and beautiful high-res screens, not to mention all the silvery switchgear, the Merc feels like a B&O wireless speaker to the Alfa’s cheap, black plastic, twin deck boom box. Having said that, the simple Alfa infotainment works perfectly well, and there is an argument to say that you don’t need 15 different ways to alter the volume of an exhaust or the stiffness of some dampers.

The thing that the Italian car unquestionably gets absolutely right is the seating position. Both cars have bucket seats but only the Giulia lets you slam them to the floor for a proper BTCC vibe. Press the red button on the Alfa’s steering wheel (a first Ferrari nod) and the V6’s mellifluous tone erupts from the exhausts. Pull away and the turbocharged V6 has an incredibly linear feel. Push harder, hold onto each gear and it revs with a seemingly insatiable enthusiasm - something that will feel familiar to anyone that’s driven a modern turbocharged V8 from Maranello. It’s not especially short geared, but such is the alacrity with which the needle sweeps round the dial that it feels like you’re pulling gears more quickly than usual.

Turn the DNA dial to D or even Race and you get even more of the V6 soundtrack in the cabin and each pull of the cool metal paddles is accompanied by a sort of six-cylinder version of the the now ubiquitous VW DSG parrp.

But as strong as the Alfa’s engine is, for me it’s the chassis that shines most brightly. The man behind its development was Philippe Krief, the same genius that worked on the 458 Speciale. And it shows. The Quadrifoglio feels alive from the moment you set off thanks to Ferrari-esque quick steering. Yet the clever thing is that it’s allied to suspension that has a lovely supple feeling to it. This not only calms the inputs of the quick steering a fraction but means that the Giulia tackles a bumpy road with fluidity as well as precision.

It feels like an unusual amount of suspension travel in a modern performance car but it means that whatever the speed, slow or fast, you can enjoy the cornering balance of the car as it leans into its springs. You also sense the shifts in surface going on beneath you and while it wasn’t a comparison available at the time of the Giulia’s launch, I can now say that it feels not unlike a Saloon version of an Alpine A110 in the way that it moves down a road.

The C63 S starts with a thunderous V8 snargle (a combination of a snarl and a gargle, most often heard when Lions get their mouthwash routine wrong) that is everything you want it to be and even more theatrical than the Alfa’s V6. Select Drive via the column stalk, squeeze the accelerator and you notice you need a few more degrees of ankle articulation to get the sort of response that you did in the Alfa. The steering also needs a little more lock for any given turn and as a result it is easy to think the Mercedes a little slow witted compared to the Giulia. However, where the C63 S quickly asserts its aggressiveness is in its suspension, which instantly feels shorter in travel and more firmly damped. 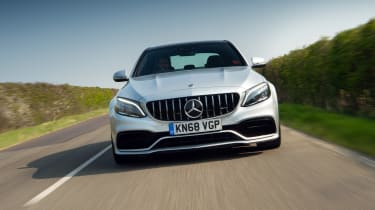 At everyday speeds then the Mercedes feels confusingly harder riding but also less alert than the Alfa. It predominantly provides its day-to-day entertainment in short bursts of fearsomely fast and gloriously sonorous eight-cylinder acceleration. As I’ve mentioned, you have multiple ways of selecting the louder (or Powerful as opposed to Balanced in AMG speak) exhaust, but I found the easiest thing to do was spend about 30seconds setting up the Individual mode with your personal preferences and then it’s easy to toggle between Comfort and Individual with one twist of the rotary switch on the steering wheel. The facelift’s move to the nine-speed Speedshift MCT ‘box also adds an extra crispness to shifts and makes playing tunes up and down the rev-range more enjoyable.

But the C63 S isn’t just a straight-line saloon. No, it doesn’t have the Alfa’s bewitching any-speed blend of suppleness and precision, but when you find a good piece of road and push the C63 S hard it is actually arguably the more accomplished car. With more speed you might expect the firmer suspension to become crashy, but it retains control beautifully and allows you to place the car with terrific accuracy. You feel the bumps and cambers, but it’s informative rather than distracting.

Turn the ESC all the way off and the aforementioned rotary switch on the steering wheel morphs into a digital facsimile of the yellow nine-stage traction control switch on the AMG GT R. Turn that anticlockwise all the way to nine (off) and in the dry at least the C63 S is supremely controllable. The electronically regulated limited-slip diff (now standard on the non-S too) is fantastic at managing the way the Michelin SuperSports spin up so that it all feels smooth and progressive as the rear begins to break away. And where the Alfa tends to lean into its suspension and wander a touch during slides, the Mercedes feels much neater. Whether you just want a small smudge of oversteer or the sort of slide that creates more smoke than a wet-leaf bonfire on a windy day, the choice is very much yours.

So, which saloon to choose? Well, there is no getting away from the fact that the Mercedes costs £12,000 more than the Alfa. However, given that the non-S version of the AMG now gets the trick diff, still has more torque (479lb ft) than the Alfa, and only costs just £3,000 more than the Giulia it feels like there is still a decision to be made.

The impressive thing about the Alfa is that the Quadrifoglio’s qualities haven’t dulled with prolonged exposure. It remains distinctive and desirable three years on from the initial clamour at its launch. Meanwhile the C63 S, in one form or another, has been a staple in this class for years. It has always been an appealing option but in this latest iteration with its crisper gearbox and tauter suspension this really does feel like the best one yet.