Initially created for a computer game, Citroen’s GT supercar now exists in the real world too. We drive it 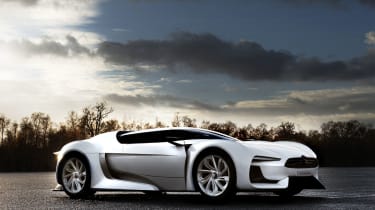 Computer games. Not really in my skill set. I bought a PlayStation 2 a while ago, because I thought I should, and have used it only twice. However good the latest driving games are, they still seem to me far removed from the reality of driving the sort of cars I like.

But I have just been driving a computer-game car, and this one felt very real indeed. That’s because it is. Meet the GTbyCitroen, the concept car that turns the usual creative process upside-down.

Normally it goes like this. Cool brand makes supercar, supercar is drooled over, supercar is digitised and added to the computer-game paddock. Not this time. Here is a supercar created for the virtual world, a way of bringing the Citroen brand to the millions of PlayStation 3 owners who have just indulged in the latest ‘Spec III’ version of Gran Turismo 5 Prologue. Released first as a stream of megabytes for that new game, the GT then appeared at October’s Paris show in its second incarnation, as a real, solid, working concept car.

Citroen designer Gilles Vidal explains. ‘When we froze the computer-game model, we gave the design to Polyphony [which now creates the Gran Turismo games] and at the same time started work on the real car. Visually, the two versions are identical.’

So there’s no artistic licence, no stretching or shrinking. The real GT is the computer GT in full size and three dimensions. Except, that is, for one crucial detail. The virtual version has a fuel-cell power unit able to send 650bhp via all four wheels, plus a brief extra burst of 178bhp when you get back on the power after braking hard thanks to a regenerative braking system. The real one does not.

Such a system is buildable, says Vidal – Peugeot-Citroen has done the sums – but as the real GT approaches our corner of the Mortefontaine test track, a little way outside Paris, it’s clear there is no fuel cell here. Instead there’s a sound remarkably like that of an impatient V8. Apparently it’s 560bhp-worth, and the mid-mounted motor sends its efforts to the rear wheels via a proper sequential gearbox. But whose V8 is it? It’s not from the PSA group, clearly, because it doesn’t make one. And to reveal a non-family brand name would be off-message. It would be good to know, though.

More fundamental, however, is this question. Why has Citroen built a supercar? Is the idea not ridiculous? And if it is not, might there be another of the sort we could buy?

Gilles Vidal’s colleague Takumi Yamoto explains how the GT happened. ‘I have a friend who used to work for Polyphony, who gave me the chance to meet the president [Kazunori Yamauchi, who is also the vice-president of Sony Computer Entertainment and the inventor of the Gran Turismo games]. I couldn’t miss the opportunity for collaboration, so I went to Japan and presented the project idea. Kazunori said yes, so I presented it to Citroen who also said yes.’

It’s an image-enhancer, then. ‘There is no GT past for Citroen,’ says Vidal, ‘so there’s no legitimacy. But as a French TV car programme said at the Paris show, Citroen is probably the only such company that could get away with it. The brand is building an image now, and that image is not especially similar to our products. A Citroen rocket, for example, would be credible.’ On that basis so would a production GT, but don’t hold your breath.

Right now, though, the GT that has just stopped beside us is looking quite menacing, but not outlandish beyond credibility. The idea was to design something between a road-going supercar and a Le Mans-type racer. There’s something of a Lancia Stratos about the way the windscreen flows into the side windows in one continuous curve beneath a seemingly floating roof. ‘Or something of a Citroen DS,’ opines Vidal, pointedly.

Giant blade-like scoops and extractor vents frame the nose and tail, making the GT seem almost like one car hiding within another, while a blade-like, movable rear spoiler adds length and subtracts from Euro NCAP-friendliness. Computer simulation suggests the car’s shape is fundamentally right aerodynamically, although if the real GT were to make full use of its 560bhp a few tweaks would be needed.

One particularly neat detail is the way each door mirror appears to be made from a single folded ribbon of coarse-check carbonfibre, although each one is actually made up of ten parts perfectly bonded together. The chequered motif also happens to be almost the same as that found on a new range of Louis Vuitton luggage, which may or may not have helped the GT win the LV Classic Concept Award to be presented at the Geneva show.

The doors open scissor-fashion on lattice-like cast-aluminium hinges, and quite a sight then meets your eyes. The cabin is dominated by bars of copper – centre console, dash, along the doors – some of it seemingly rough-cast as though a piece of contemporary art. It must weigh a ton.

But it doesn’t. The copper components, be they polished or rough, are actually made of resin that is then copper-plated. The resin components are themselves made by stereolithography, a fabrication process where a computer-controlled laser cures a photosensitive resin, layer by layer, and a full-size component gradually appears before your very eyes. I’ve seen it in use and it’s astonishing. ‘You can even make a sphere within a sphere within a sphere,’ says Vidal.

Just as sculpturally fanciful is the skeletal-looking nest of helices that makes up the outer steering column, contrasting with the race-car functionality of the banks of shiny toggle switches atop the centre tunnel and set in the roof. There’s a futuristic-looking head-up display, too.

Time for a drive. But there’s a snag. The gearbox is ignoring the shift buttons on the steering wheel, meaning selection is a lottery. So I accompany the test driver while he tries to diagnose the problem. The GT, when it yields a gear, feels a convincing supercar, but its cabin is as hot as a coppersmith’s forge, all those metallic-looking bars seemingly the source of immense heat. When we stop I’m almost gasping for air.

The engine cover is released so the engineers can manually select second gear. Aha! I can see the engine, but what is it? ‘Ford 4.6-litre V8 with supercharger?’ I ask, searching for a flicker of certainty before the corporate denial. All present remain po-faced. But I think that’s what it is. Anyway, the car is in second and now I’m going to drive it, provided the bump start (it has a clutch pedal) is successful. It is, and off we rumble at a suitably supercar-ish lick. The GT works, and it even steers and brakes convincingly because Parisian company Estech, the prototype and styling-model builder whose first concept-car build this is, has done a rather good job. There’s nothing video game-like about this car’s tactile responses.

If the Ford GT40 had been conceived four decades later, it might have been a little like this. The reclining driving position and the shape of the window on the outside world are very similar, as is the soundtrack. This last part was a touch louder during the first test run on the roof of Citroen’s Vélizy styling centre, because there were no exhausts, but even with token silencing the GT sounds pretty angry.

It also smells of petrol inside, so given this fact and the huge heat, I’m comforted by the sight of a fire extinguisher ahead of the passenger seat. Assaults on the senses of smell and touch, plus a very analogue stimulation of the eardrums generated by a more controlled form of combustion – you certainly don’t get those in the virtual version.