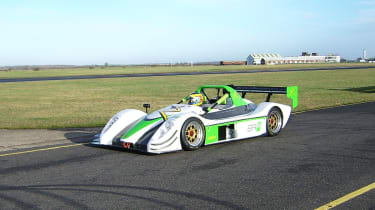 It’s four years since the SR8 was launched and yet it still remains the fastest way to go club racing in the UK (and quite possibly the world), and with its standard passenger seat it’s brilliant for scaring the bejesus out of your mates on a trackday. I was fortunate enough to race one of these sportscar missiles with the factory in that inaugural season and I’ve been itching to get beck into the hot seat ever since.

Radical have never been a company to sit on their numerous laurels, so as you might expect the SR8 has been continually refined and developed every year it has been racing and the 2009 version looks quite different from the car I shared with Phil Abbott, one of the Radical co-founders. The other one, Mick Hyde, is here today at a very cold Bedford Autodrome with the latest incarnation to guide me through the changes.

The most obvious update is the aerodynamic package brought in last year following wind tunnel analysis that apes the current trend in LMP prototype racing for a central nose section with the air swept through to side-mounted radiators. The 2.6-litre V8 engine uses superbike technology, utilizing the heads, barrels and pistons of the Suzuki Hayabusa motor, while the rest was designed and built in-house by the Powertec arm of the Radical group. It now develops 380bhp at a heady 10,500rpm – twenty more than in my day and if that’s not enough for you, then you’ll need the 2.8-litre LM version, packing an extraordinary 460bhp.

The gearbox is the final change, it now has paddles operating a six-speed sequential transaxle that allows clutchless, full power upshifts and clutchless down shifts that blips perfectly for you. I’ll use the left-hand pedal only when moving away or when shifting at low speeds.

Time to climb aboard spaceframe chassis then. Once behind the wheel everything is reassuringly familiar, Radical’s ergonomics have always been spot on, the positioning of the switchgear, pedals and wheel are perfect, even the angle of the moulded seat feels immediately right. It’s a race car designed with a driver’s input at every stage.

Ignition and fuel pump on, thumb the starter, wake the rev-hungry V8, pull back on the right-hand steering wheel lever, feel the car judder as first engages, squeeze the throttle, ease out the clutch and we’re heading out of Bedford’s West circuit pitlane.

As with all testing at this time of the year we’re at the mercy of the weather. It’s very cold, icy in fact, and a low, weak sun is having little effect on improving matters. The track is part dry, part damp but worst of all in the shady sections there are still patches of black ice. But with the majority of the circuit dry or nearly so wet weather tyres would soon be wrecked, so I’m on slicks. Wish me luck!

After a couple of laps to get some heat into the oily and rubber bits that require temperature in them to operate properly I begin to work the SR8 harder. Two things are immediately apparently apparent; the first is that this car is markedly more polished than the original incarnation, and the second is that it is seriously rapid. Boy is this thing quick!

The engine is noticeable smoother across the rev range the power delivery is superb, with no hesitation at low revs or any spikes at the top end, which enables you to be accurate with your application in any corner. The gearbox is a sensation, upshifts are lightening fast, the new cog engages with a thump the moment you pull the lever, while no blipping or clutch-dipping on the way down allows the driver to focus totally on getting his braking absolutely pot-on.

It is this driveablity that has always been one of the keys to Radical’s success (they are selling more cars now that at any other time in their history - what economic crisis?) and the level of feel, detail and feedback you get at the wheel is nothing short of brilliant, particularly in a car with so much downforce. You always know where the limits of grip are both at the front and the rear, and as you will see on the video, catching slides is easy, even on those patches of ice.

Despite the conditions I was able to turn in a lap of 1 minute 17 seconds on just my fourth tour of the day. That’s six seconds faster than Porsche Carrera GT managed in perfect conditions and with a little more ambient temperature, a few more laps and a little less ice, it’ll go way quicker than that. We’ll be back later in the year to discover just how much quicker - I can’t wait for another run.