After the disappointment of Croft, Roger Green decided to do some pre-race testing before Castle Combe, but will it pay off? 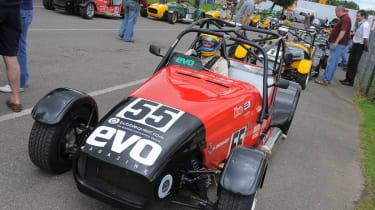 What a difference a day makes. Or, to be more accurate, what a difference a trackday makes. So far this year there has been little in the way of planning and preparation for each of our Westfield Sports Car race meetings. We’ve basically turned up at the circuit a few moments before scrutineering, rolled our AeroRace off the trailer, got the paperwork done, jumped in, shot out for qualifying and hoped for the best. This caught us out badly at Croft (evo 121), where a track that went from wet to nearly dry to wet again left us playing catch-up all weekend.

Desperate not to make the same mistake again I booked myself onto a Castle Combe trackday just before rounds six and seven of the series to get myself and our home-built car dialled in to this brilliantly fast and tricky circuit. It works quite spectacularly. Qualifying sees me third on the grid for the first race and on the front row for the second. Now that’s more like it!

The 2-litre Zetec-powered AeroRaces are new for this season and we’ve been trying to get on terms with the older Class B cars. They may only have the 1.8-litre engine but they’re lighter and, with a little blueprinting, have at least as much power. With a longer first gear they make demon starts too, as proved by reigning champ Andrew Spencer who drives around the lot of us from row three as the red lights go out, snatching the lead by the first corner. Fortunately I saw this coming, so I follow him through, using the hole he’s punched in the air to breeze past the front row.

And then, halfway round the lap, a gap appears on the run to Tower Corner. I fill it with car 55, out-braking Spencer into the turn. I’m now in the lead, in a car Peter Tomalin and myself built in Harry’s garage! I feel like punching the air in delight, but it’s not the done thing on lap one and, anyway, Spencer makes the most of his straight-line advantage and drives back past me on lap two. But I reclaim the place again as the leading group of six cars, all tightly bunched, swap places at every corner. This is what we came for!

Officially I lead the first three laps, but the only time I’m actually ahead is through the last corner and across the stripe. It’s incredibly close racing but the best thing is it always feels safe. There’s no touching and if you go for a gap you might be squeezed but you won’t be forced (or nudged) onto the grass. It’s hard, but it’s always very fair, making the racing exciting and hugely satisfying. The 20 minutes pass in a flash and I finish third, less than a second behind the winner.

Race two doesn’t go quite as well, the combination of the trackday and the exploits of race one having taken the best from our car’s tyres, which soon offer barely any grip at all. Another strong third position slides away and I eventually finish sixth. It’s not all bad though, as I was still second in the AeroRace class, which means I’m now leading that championship! That’s something we wouldn’t have dared dream about back in March.