You’ve seen the Good. Now it’s the turn of the Bad and the… erm, aesthetically challenged. This is our celebration of the very worst of 2008 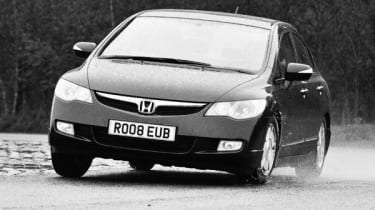 If it were Dragons Den, this lot wouldn’t even make it up the stairs. If it were The X Factor, at least one of the contenders would have had a swing at Simon Cowell by now. And if it were Strictly Come Dancing, the Skelta would be sobbing on Bruce Forsyth’s shoulder in a fake tan and a pair of sequinned briefs. Which, come to think of it, would be an interesting new look.

But this is none of those things. This is Not the evo Car of the Year and everyone’s a loser here, even the winners.

STILL IN THE WILDERNESS AWARDWinner – Saab For the 9-3 Turbo X Every year there’s a new Saab that we hope might just be up our street or, rather, down our twisty B-road. Why? Well, the old folk here remember when the once idiosyncratic car- maker was a more famous Swedish export than IKEA meatballs, and it was all thanks to the 900 Turbo, a black, front-drive, turbocharged three-door coupe that was a hoot to drive. The model attempting to recapture past glories this year is the 9.3 Turbo X (which comes with a boost gauge just like the late-’70s icon and is only available in black). With a 276bhp V6 and four-wheel drive it ought to be a laugh. But it isn’t: ‘It is frustratingly un-interactive,’ we concluded. Maybe next year?

Runner-up – Lancia DeltaLittle here to spark the interest of an Integrale owner. Or, for that matter, any keen driver. Don’t hold your breath for Lancia’s UK return.

WORST CAR LAUNCHWinner – Keating for the shambles of the SKR launchCompare yourself to Colin Chapman, boldly claim to have built a ‘world-beating supercar’ that will leave the big-name opposition for dead (panic now, Ferrari and Lamborghini) and you need to unveil something special. Anthony Keating revealed what appeared to be an exotic ’80s kit-car. And while the Keating SKR (evo 119) may yet be ‘available with up to 1500bhp’, the 400bhp demonstrator/prototype revealed that there was still rather a lot to do, such as fitting seat belts. It broke after a couple of demo runs but our correspondent wasn’t too gutted that he missed out on his drive – 400 yards in a straight line on an airfield service road.

Runner-up – Bentley You travel all the way to Boston, USA, to drive the 200mph Bentley Flying Spur Speed and the test route is 300 miles on traffic-congested, roadworks-blighted, speed cop-infested, 45mph-limited roads. What’s wrong with the M1 roadworks near Crewe?

LOSING THE PLOT AWARDJoint winners – Subaru and Mitsubishi Since before the birth of this magazine, there has been a fierce battle between Mitsubishi and Subaru to build the most effective and thrilling four-door, four-wheel-drive, turbocharged rally car for the road. With each new generation the engineers from each company have strived to better their rivals and in doing so delivered an unbroken string of brilliantly effective, giant-slaying drivers’ cars. Until now. Inexplicably, the latest generation Evo and Impreza have gone a bit soft, simultaneously. Worst affected is the Impreza, which is now bland looking and woolly and uninspiring to drive, especially in WRX form, but the entry-level Evo X is no fireball and is astonishingly and unjustifiably thirsty. There is a ray of hope, though, because the next-generation models should be along any minute.

Runners-upPorsche, which on the evidence of the 997 mk2 appears to be set on a course to purge all character from the 911; the latest direct injection flat-six has no voice on a light throttle, the chassis now gives less feedback and PDK removes a whole layer of interaction.

The FIA, which seems intent on deciding the outcome of Formula 1 races after the chequered flag has fallen and penalising valid attempts to race.

CAN'T BUY ME TASTE AWARDJoint winners – TechArt and Gemballa Take a 911 Turbo to German tuners TechArt or Gemballa and for a total outlay of £190K and £300K respectively they’ll give you back a much more potent and striking 911. The TechArt GTstreet and Gemballa Avalanche certainly turn heads and drop a factory Turbo like it’s got its handbrake on, but neither delivers a drive as rewarding and honed as the stock model. And the GT2 is better than either.

Runner-up – Mansory  For styling crimes to various Ferraris and Mercs (evo 117 if you haven’t just eaten).

Runner-up – MG SV-R. Imagine the pent-up demand for this baby.Oh, and an honourable mention for the Mini Clubman.

Runner-up – Peter TomalinFor baulking the emergency support vehicle in our 350Z racer on the opening lap of the Sport Maxx race at Pembrey (OK, that was in 2007, but it still makes us laugh in 2008)

THE RAY CHARLES SPECIAL AWARDWinner – Skelta G-forceIt’s got the brilliant running gear of the Honda S2000 and it’s darned effective on road or track, as proved by some very competitive stage times on the Targa Tasmania Rally. But you still wouldn’t, because it looks hideous.   Runner-up – Weber F1 Star of the Top Marques show, it was like a Lancia Delta painted onto a cereal packet. Oh, and another honourable mention for the Mini Clubman.

FOR SERVICES TO THE ANTI-CAR LOBBYJoint winners – BMW X6, Audi Q7, Porsche Cayenne and all giant SUVsThe X6 is great to drive, and so is the Cayenne, but, come on, what’s the point? These two-ton-plus edifices have allowed a few chassis engineers to prove how smart they are but, now more than ever, the role of these over-powered bully boys’ ‘cars’ appears to be to give future generations something absurd to mock.

WORST STYLING DETAILWinner – False tailpipes  (like those of the Ferrari California)Big, impressive chrome tailpipes but hang on, look! – the real exhaust is the diameter of a pea-shooter. No doubt there are sound engineering reasons for it, but for credibility’s sake, make sure you can’t see the puny pipe, please.

Runner-up – Jag XF headlightsThe lights on the concept looked so cool, so why does the production car look like it’s wearing a monocle in each eye?

Disappointment of the year

Thing is, Porsche has nailed the tricky bit, which is getting the refinement of PDK just-so in all situations. The seven-speed gearbox is smooth-shifting and unobtrusive in auto mode, and faster if a little thumpy in the ‘sport’ modes. It’s also a boon to economy and CO2 emissions and faster in standing-start tests than the manual. Great, if you simply want an automatic 911. Not so good, thanks to those beffudling steering wheel buttons, if you want to feel involved and in control.

Why buttons anyhow? Why not paddles, two of them, one marked with a big ‘-’ denoting downshifts, the other with ‘+’ for upshifts. They work for plenty of other car makers and we haven’t met anyone who finds them confusing. The perverse answer is that the PDK buttons are designed to make those customers used to the old Tiptronic steering wheel buttons feel comfortable. Did it not occur to Porsche that those clumsy Tiptronic rocker switches were rubbish and should have been ditched long ago, not reinvented as even-less-ergonomic sliding switches for PDK? A glance down at them won’t clarify which way you should shove either because the markings are too small.

It has never been a chore shifting gear in a manual 911 with the venerable six-speeder. If you don’t want or need an automatic 911, avoid PDK because it will irritate the hell out of you.

Runner-up – KTM X-BowA stunning design and a great package - carbonfibre monocoque by Dallara, engine by Audi, chassis development by Bicocchi. Shame KTM forgot that minimalist cars like the X-Bow are supposed to be about raw, adrenalin- fuelled excitement.

The KTM is too good, too like you’d imagine a lightweight developed by a big car maker would feel. It’s too quiet and rides so effectively that it disguises its speed too well. And then there’s the price. At £50K basic, £80K with all the must-have options, you’ve really got to be ga-ga for the looks and construction.