The Ruf CTR annihilated Ferrari's F40 in the speed stakes over two decades ago. Here's the story 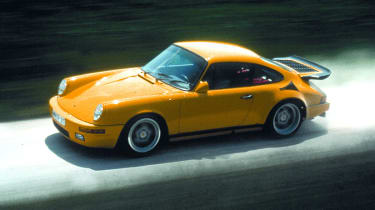 211mph. It’s an impressive figure today, but two decades ago a road car achieving such a speed was barely believable. In fact, it wasn’t until March 1987 that a street-legal car was first claimed to exceed the 200mph milestone. That car was the Ferrari F40, and its top speed of 201mph made it the fastest road car in the world. It wasn’t a record it would hold for long.

Just weeks later, America’s Road & Track magazine organised a little get-together at Volkswagen’s Ehra-Lessien test track in Germany. Amongst the nine cars in attendance were representatives from the supercar establishment, including a Ferrari Testarossa, a Lamborghini Countach 5000S and a Porsche 959, and a handful of highly tuned specials that included an AMG Hammer (a 375bhp Mercedes 300E), a Koenig/RS (a wide-bodied Porsche 911 with twin turbos and 520bhp) and a narrow-bodied, 469bhp 911, officially called a Ruf CTR, but nicknamed ‘Yellow Bird’ by the photographers on the test because of the way its bright paintwork stood out in the dull weather conditions.

The aim of the gathering was simple: to find out which car was the fastest. The driving would be handled by journalist and Le Mans-winning racing driver Paul Frère and former F1 champion Phil Hill. The slowest car present was something called an Isdera Imperator 108i, which achieved a respectable 176mph. Only two cars passed 200mph: the Koenig, which achieved 201mph before a snapped fan belt put it out of the running, and the Ruf, which hit 339.8kph, or 211mph.

Just how had this simple-looking 911 gone 10mph faster than an F40? Its size was partly responsible. By basing the CTR on the slim-hipped Carrera 3.2 rather than the wide-arched Turbo, Ruf could take advantage of the substantially lower drag. The CTR was made even more slippery by removing the rain gutters and fitting smaller wing-mirrors.

Under the lightweight aluminium engine cover, Porsche’s 3.2-litre flat-six had been bored out to 3366cc, fitted with a DME fuel-injection system originally developed for Porsche’s 962 racers, and, most importantly, equipped with a pair of turbochargers and twin intercoolers. And where Porsche’s 911 Turbo only had a four-speed gearbox, the CTR had a five-speed ’box of Ruf’s own design (in fact Ruf had been offering a five-speed unit that could be fitted to the 911 Turbo since ’81).

Completing the package were 330mm cross-drilled and ventilated Brembo brakes front and rear, and 17in Speedline wheels fitted with special Dunlop Denloc tyres, which were originally developed for Porsche’s 959 and designed to stay attached to the wheel rim in the event of a high-speed puncture.

Although the CTR was rated at 469bhp at 5950rpm, company head Alois Ruf would later admit that ‘we use very big horses in Pfaffenhausen’. Those oversized horses would make themselves felt again a year later when Bernd Ostmann (now editor-in-chief at Auto Motor und Sport) would take the car to 212.5mph at the Nardo facility in Italy. But it was on a completely different kind of track that the Yellow Bird would make perhaps its most famous appearance, when in 1989 test driver Stefan Roser would take the CTR for a spin at the Nürburgring.

The laps were captured on camera and released by Ruf in a video called Faszination on the Nürburgring, and they instantly became the stuff of legend. It’s the in-car footage from the first (albeit occasionally edited) lap that really amazes. Roser is clearly totally committed – using the CTR’s abilities to the full, annihilating all other traffic on the circuit, making major corrections with the wheel almost faster than the eye can see and at speeds the mind can barely comprehend – but at the same time he’s showboating wildly, taking every corner he can sideways, and somehow managing to look relaxed throughout. Although maybe that’s because he’s wearing short sleeves, jeans, slip-on shoes and no helmet