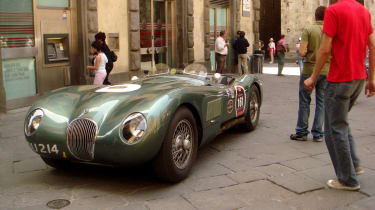 Mention Mille Miglia and invariably it’s an image of Stirling Moss driving a Mercedes SLR that comes to mind. The astonishing near-100mph average he achieved in the 1955 race is the stuff of legend, but what’s less well known is that Moss cut his teeth on the Mille in Jaguars. You never hear about his first attempt, at the wheel of an XK120 in 1951, as it didn’t go too well – he retired barely 20 miles in with gearbox failure. But he tried again in 1952 in a works C-type and did rather better. Now, 57 years after that race, I’m hoping to get a taste of what he went through.

Today’s Mille Miglia, held every year in the middle of May, is essentially a slightly more sane recreation of the original race. Nearly 400 cars have been entered for 2009 and I’m lucky enough to be partnering the owner of what is reckoned to be the ultimate Jaguar C-type in existence: chassis number 4. What makes it so trick is that it has the original ‘works’ disc brakes (complete with six-piston calipers at the front), a fire-breathing 3.4-litre race engine (pushing out between 260 and 300bhp, depending on who you speak to) and the most beautifully honed chassis. It’s been winning races ever since it left Jaguar’s Browns Lane workshop way back in 1952 and is currently conservatively valued at £2.5 million. Yikes.

It’s a beautiful car, shaped to look fast just standing still, the twin exhausts exiting from the sills enabling it to run as low to the ground as possible. The C-type was born out of Jaguar’s desire to make a more streamlined version of the XK120 for Le Mans, and it immediately proved a success, winning the 24 Hours at its first attempt in 1951. The following year Jaguar was experimenting with disc brakes on its race cars, but William Lyons fancied testing them prior to Le Mans and decided it would be a good idea to enter a C-type in the 1952 Mille.

When Moss and co-driver Norman Dewis (Jaguar’s development chief at the time) lined up on the start line in Brescia at 6.19am, neither had any idea where the 1000-mile route went, but fellow competitors had told them it was easy: just drive between the crowds, and as long as there were spectators by the side of the road you were going the right way. In 2009 we’ve got a huge route-book to follow, so if we get lost it’ll be entirely our own fault. Our start time is 8.40pm, but unlike in 1952 we won’t be driving the whole route non-stop; there are a couple of overnighters on the way, plus numerous visits to historic towns.

As we climb the start ramp, the electronic timer counts down to our allotted start time and with a wave of the flag, we’re away. I’m in the passenger seat to begin with as we’ve agreed that the car’s owner, Nigel Webb, should take the wheel down to Rome, then I’ll drive it from there, back to Brescia. Still, it’s toasty warm in the passenger seat, thanks to the exhaust living just a thin sliver of aluminium away from where I’m sitting.

As the early miles pass by, I can tell the car is giving Nigel a real workout. The steering is heavy and the lights aren’t great, but the biggest problem is keeping the engine in the power-band. It isn’t interested in pootling, so flat-out is the only way to go. Still, tonight’s 250 miles pass by relatively easily and we arrive at our first stop, Ferrara, at 1.12am. It may be late but the streets are still teeming with people as competitors park-up all along the main high street, abandoning their cars in exchange for a bed for the night. It won’t be a long stop, though, as we need to leave for Rome in around six hours’ time.

THE NEXT DAY STARTS bright and it’s a big relief not to be driving in darkness any more. We’re soon into the groove and tearing through the enticing Italian countryside. All seems to be going swimmingly until we close in on the hilltop province of San Marino, reached via a winding, uphill dual carriageway, and the traffic ahead slows to a crawl. Not a problem normally, but for our car it spells disaster, as its clutch won’t stand for repeated hill-start abuse. Combined with the engine’s reluctance at low revs, the inevitable happens and we coast to a stop with a cooked clutch.

For a moment I think this is it, we’re out of the event, but, miraculously, once the clutch cools down it seems to work again. We know there’s no chance of it lasting the course without failing completely, though, so we decide to abandon the rest of the day’s route and get to Rome a bit earlier to give our mechanics the best chance of changing the clutch overnight. But it takes longer than we think and it’s midnight before we reach Rome. I’m in the land of nod when a text arrives saying, ‘clutch changed, car ready to go’. Brilliant.

The run down to Rome was all so very different for Stirling Moss. He soon realised the revolutionary disc brakes on his prototype ‘C’ were unbelievably good, almost halving stopping distances. They even allowed him to out-brake and pass the works Mercedes of pre-race favourite Rudolf Caracciola. Unexpectedly, by Rome, Moss was up to fourth place.

IN THE MORNING it’s my turn to drive. There’s only one door on a C-type, and it’s really more of a flap than a door, so the preferred entry method is to forget about it and just swing your leg over the bodywork, stand on the rudimentary leather bucket seat, then wriggle your legs down into the footwell. In front of you are individual fly-screens (which are more effective than you might think) and on the driver’s side, behind the gigantic steering wheel, two enormous Smiths dials – a tacho and a speedo – with three minor dials for temperature, charging rate and oil pressure.

I twist the tiny ignition key one click to the right and thumb the starter button. The engine emits a glorious bark as it bursts into life. It may only have six cylinders but I’ve never heard a straight-six sound better. The triple Weber 45 carbs hiss and spit through their open trumpets, then from around 2500rpm it’s as if a switch has been thrown as harmony returns and the engine roars through its range at a twitch of the accelerator. The exhausts are just open pipes, no silencers, so there’s no escape from the cacophony of sound as the uneven beat reverberates off the surrounding buildings.

We’re escorted out of Rome by police outriders and soon we’re on the famous SS2, connecting Rome to Siena. By the time we reach Tuscany I’m really letting the engine sing. The gearbox swaps ratios beautifully each time the self-imposed 5500rpm limit approaches and the thrust of acceleration is seemingly endless. At one point we try holding well over 100mph for a while but the buffeting is extraordinary. The mere thought of keeping this up over 1000 miles seems even more unbelievable now than it ever did before.

The big steering wheel really helps me haul the Jaguar into the corners, and on the exit the power is there in an instant. Stringing some sweeping bends together through the Tuscan hills in this beautiful car is one of the most fabulous experiences I’ve ever had, raw and exciting. The C-type is my new best mate and I simply don’t want to stop. But if I did then the spectacular brakes would be well up for it – they can easily match a modern car for stopping power.

Soon, though, we’re into Siena and the traffic is starting to build. It’s hot now too, and while I don’t want to swap seats, my clutch leg is dying to the point where I have to give in and let Nigel take over. Damn it.

Back in 1952, things got even better for Moss and Dewis on the return leg. As they arrived in Florence they found themselves up in third place after averaging nearly 89mph. There was even a whiff of a chance of outright victory, despite their complete lack of knowledge of the route. But this was to prove their undoing. Just 123 miles from the finish, disaster struck. They rounded a corner only to find a stream of water cascading off the hillside and onto the otherwise dry road. They skidded and hit a rock at the side of the road, breaking the steering rack from its mountings and taking them out of the race.

For us, as we leave Siena there’s still another 300 miles to go, and while the scenery is beautiful, the roads are getting clogged. The Futa Pass is a procession. It’s only once past Modena that things start to clear. Trouble is, it’s now dark and our dynamo is giving up, so our already iffy lights are fading. Reluctantly, we decide to give the final checkpoint a miss and follow our support car to the finish in Brescia.

We finally clear the finish ramp at 2 o’clock on Sunday morning, yet the place is still alive with excitement. This has been one hell of a trip and driving our travel-stained Jag back to the hotel in the cool night air feels like the perfect way to finish off such an extraordinary few days.

If you ever get the chance to do the Mille, just do it. There really is nothing like it. If you want to win, make sure you’re Italian and drive an open-wheeler. If you want to do it on a budget, choose something like a TR2 or MGA from the early ’50s. But if you want the ultimate thrill, find yourself a rip-snorting Jaguar C-type and drive it like a rental; you won’t win, but you’ll have the time of your life.

Huge thanks to Nigel Webb, Jaguar Heritage, Fester and Gary for getting the C-type through to the finish