The British Touring Car Championship has seen more than its share of spectacular crashes over the years. Stephen Dobie recalls some of the best 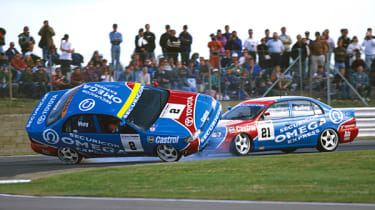 The BTCC isn’t just about crashing, of course. It’s been providing edge-of-the-seat racing since 1958, and was many a racing fan’s championship of choice during its 1980s and ’90s heyday. Thanks to HayFisher’s BTCC – The First 50 Years DVD you can educate yourself on the twists and turns the series has gone through, from its early amateurish days as the British Saloon Car Championship through the big-budget ’90s to today’s championship in which independent teams play a much bigger role.

There’s a heap of archive footage and interviews with the sport’s most important people – they’ve even let Tim Harvey in there to share his experiences from years of paint-swapping in a variety of cars. An extra disc also boasts four of the great end- of-season shootouts, including 1992’s classic between Harvey, Cleland and Hoy. Oh, and there’s crashes on there too. Brilliant. (£14.99 from Motorsport DVD, www.msdvd.co.uk)