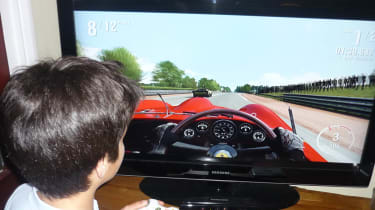 I’ve played plenty of driving games on PlayStation and Xbox – from Need for Speed and Midnight Club to Gran Turismo - so I couldn’t wait to get my hands on Forza Motorsport 4. But does it live up to all the hype? Well, the range of cars is just extraordinary, from Nissan Micra to Lamborghini Reventon, and from Golf GTI to McLaren F1, and the vastness doesn’t stop there. It carries on through the hundreds of tracks, the numerous body parts and the never-ending list of vinyls that could keep you away from racing for days as you customize your car (you can even add a racing front spoiler and a massive wing to a Morgan Aero 8). In any review of Forza you will see many mentions of the exceptional graphics. There’s an almost unnecessary amount of detail in the scenery around you  - a couple of times I found myself stopping in the middle of an A class race just to see my Jaguar XK in front of the magnificent Bernese Alps. The range of circuits, from Maple Valley to the Top Gear test track, is huge. One of the many things I love about the new Forza is driving down the old Mulsanne Straight at Le Mans  - the one before they put the chicanes in, trying to hit the top speed in cars like the Veyron and Zonda R. But the real stars of course are the cars, and Forza has introduced me to classics such as the Ferrari P4 and Lancia Stratos HF. My dad had told me how tricky the handling is on a Stratos and that’s exactly how it is in the game – get it wrong and you spin off. Especially if you turn all the driver aids off, which I soon did. The realism is generally good, although finding that a Lotus Elise can carry on after a 120mph crash with a Hummer is a bit unrealistic! I suppose it would be a bit boring if the game was 100 per cent authentic. Another slight downside to the game is that although you can get replays in one player mode you can’t in two player mode, which we found to be a bit of a nuisance.  Overall, Forza Motorsport 4 is the best driving game out there, and I guarantee you won’t be able to stop playing. Even my dad (evo's production editor, Peter) has a go - don’t tell anyone, but he’s pretty rubbish. This is one game that definitely lives up to the hype.