Pretty shape, BMW V8 and handling by ex-Lotus engineers. The Ascari KZ1 had it all 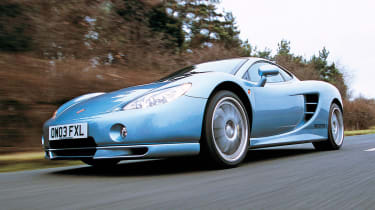 British company Ascari was formed in the mid-1990s and produced its first supercar, the Ecosse, in 1998. But it really hit its stride in the early 2000s under the ownership of multi-millionaire Dutch businessman Klaas Zwart, who had ambitious plans for roadgoing supercars, race-cars and his own race circuit and resort in Spain. The KZ1, built in a brand new factory in Banbury in the English Midlands, was his bold bid to take on the likes of Ferrari.

Launched in 2003, the KZ1 used the E39 BMW M5’s 5.0-litre V8. Breathed on, dry-sumped, mid-mounted and teamed with a CIMA six-speed manual gearbox, it developed 500bhp and allowed Ascari to attach some impressive performance claims to the all-carbonfibre, 1300kg KZ1: 0-60mph in less than 4sec and a top speed of 200mph, figures that looked even better when viewed in context with the double wishbone suspension and AP Racing brakes.

A compact, pretty car, especially from the rear three-quarters, with a delicacy and stance not unlike that of a Ferrari 360, the KZ1 was nevertheless its own car. When evo’s John Barker got behind the wheel he was impressed by the quality but even more taken with the chassis, detecting hints of Esprit Sport 350 in its clean, crisp steering and tightly controlled roll and pitch. As Lotus engineers had been involved with the car’s development, perhaps it wasn’t such a surprise. The KZ1 could also be set up more or less to customers’ individual requirements.

The bespoke tailoring certainly helped its cause but the KZ1 was formidably expensive in a world that could offer a V10 Audi R8 for less than half the KZ1’s price. Despite launching more powerful, track-oriented versions – the A10 and KZ1-R – sales only limped into double figures, and today Zwart concentrates on the Ascari resort and his racing interests.