With a V10 and a 210mph top speed, the Fighter was a different sort of Bristol 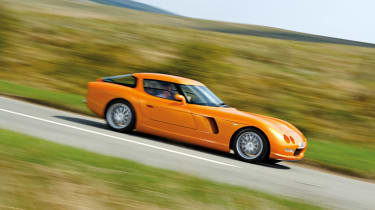 For decades, this very English marque had built quirky GTs for gentlemen. Then, right out of the blue, it decided to build a supercar. It was as unexpected as Cliff Richard releasing an album of drum and bass – and, perhaps predictably, it wasn’t a runaway success.

After half a century of building essentially the same car – the body styles may have changed but the basic template was large, luxurious, mildly sporty long-distance tourer powered by venerable Chrysler V8 – the Fighter was Bristol’s launchpad into the 21st Century. Modified Chrysler Viper 8-litre V10, two seats, gullwing doors, 0.28 drag coefficient, a claimed 210mph and 0-60mph in 4sec. Perhaps it was all too much for Bristol’s small but loyal clientele.

Toby Silverton, the jet-spares millionaire who bought Bristol from Tony Crook in 1997, did so with a view to exploiting untapped potential. The merging of missions was manifested in the Fighter, which, according to Silverton, had the potential to be the sanest, most practical 200mph+ supercar ever made. True, that image was muddled somewhat with the announcement of the twin-turboed, 1012bhp, Fighter T with its even lower 0.27 Cd, and Veyron-vaporising claimed 270mph top speed. The regular, normally aspirated £229,000 Fighter (525bhp, or 550 if you were closing in on 200mph, thanks to a mild ram-supercharging effect) wasn’t exactly slow. Laid-back yet seductively rapid, it was a beguiling alternative to the usual suspects.

Unfortunately for Silverton, there were precious few customers who shared his vision, the Fighter struggled to sell, and in 2011 Bristol Cars went into administration. The marque was eventually bought by the Kamcorp Group, who intend to relaunch the Bristol name on electric cars. Which is only slightly more bizarre than the notion of a Bristol supercar…