In the ’70s, De Tomaso was a major supercar player, thanks to a deal with Ford 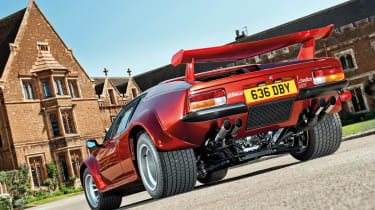 Alejandro De Tomaso’s Ford V8-powered supercar may have lacked the breeding of its Modenese contemporaries from Ferrari, Lamborghini and Maserati, but it never wanted for visual or aural drama. Firing up the GT5 version would have the windows of nearby houses rattling in their frames and teacups dancing on their saucers. The Pantera’s 5.8-litre V8 didn’t so much start as cough thunder.

The Pantera (Panther) was conceived as an image-boosting exercise for Ford in the early 1970s, filling the glamour vacuum left by the Le Mans-winning GT40. For the sake of expediency, its development was outsourced to De Tomaso in Italy. Ford engines were a given, of course, the 5.8-litre V8 supplying 330bhp and plenty of low-down torque through a ZF five-speeder.

Buy a DeTomaso Pantera on evo Cars for Sale

A prototype (called simply the 351) was shown at the 1970 New York Show. Styled by Ghia’s Tom Tjaarda, with chassis development carried out by ex-Lamborghini engineer Gianpaolo Dallara, the design was well received and showed great promise. With the longitudinally-installed V8 sitting ahead of the rear axle, it presented the intriguing prospect of being a major-league exotic – with all the style, performance and drama of its Italian contemporaries – but without the highly-strung temperament.

The Pantera went on sale in 1971. Unhappily, early cars were poorly made and unreliable. Elvis Presley is rumoured to have shot his after it refused to start. Despite growing acclaim for the way the car performed and handled (especially the 350bhp GTS version), Ford decided to cut its losses and stopped importing Panteras in 1975. De Tomaso moved to smaller premises in Modena and the Pantera remained largely unchanged for most of the next decade, a late evolutionary spurt coming in 1982 with the GT5 series, the last of which was sold in 1992.