Largest parade of Ferraris ever

Felipe Massa lead the world’s largest ever parade of Ferraris, 964 in total, around Silverstone in aid of charity. 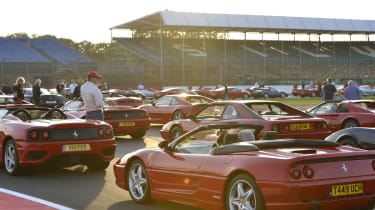 A world record 964 Ferraris made it to Silverstone this weekend, for the largest parade of Maranello-born supercars in the world ever. Ferrari F1 driver Felipe Massa was on hand to lead the parade in a 458 Spider.

The special Ferrari parade was based at the Silverstone event ‘Ferrari Racing Days’, and was organised with help from the UK Ferrari Owners’ Club.

Money raised from the stunt – £5 for each car – was donated to BEN, the British charity that supports employees from the motor industry and their families.

As soon as the record attempt has been ratified by Guinness World Records, it will knock the previous 490-strong Ferrari parade at the Fuji circuit in Japan back in 2008 off the top spot.