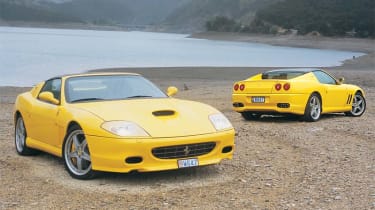 Ferrari is on a roll: the new mid-engined F430 is stunning, a huge leap on even from the superb 360 Challenge Stradale; the 612 Scaglietti looks better with every passing month and is a crushingly capable GT, and the 575 HGTC makes 500bhp+ more exploitable than you could possibly imagine. And then there's the Enzo, the only one of the new breed of ultracars that's still changing hands for significantly more than list. Put aside the disappointing start to the F1 season and it's happy times at Maranello. The revival of the Superamerica concept and name, last used in the Sixties, is just the icing on the cake. The strictly limited edition Ferrari Superamerica is a mouthwatering prospect. With an ingeniously simple pivoting carbon roof that brings only a modest 60kg penalty over the Maranello, a boost in power to 533bhp and the option of the hardcore HGTC pack, the Superamerica is a much more serious attempt at an open V12-engined Ferrari than the completely roofless and poorly executed 550 Barchetta. It promises to bring a new dimension to the heavy-hitting thrills of the 575M Maranello without sacrificing too much in rigidity and real-world usability. At £191,000 for the manual version and £198,800 with the F1 transmission option, it's not my real world, but at the Monaco launch venue we bump into more than one person who's already got an order in. So what do you get for the near-£35K premium over the awesome 575M? Well, exclusivity for a start. Ferrari will build just 559 Superamericas, all of which have been sold. Then there's the trick carbon and electrochromic glass, Fioravanti-patented 'Revochromic' roof mechanism developed with Italian glass specialist Saint Gobain. Its party-piece is its operational time of just seven seconds between closed-coupe to fully-open convertible, but the five degrees of tint for the metre-square glass panel that can be chosen on a centre-console-mounted dial is the killer techno surprise-and-delight feature, even if it takes a full 60 seconds to go from almost-black to mildly tinted. With the new roof comes a new, more clinically defined rear end. The thick buttresses and concave rear screen sit above a new carbonfibre boot-lid, complete with raised Ferrari shield in its centre. The higher, more voluptuous rear wings in combination with the low roof-line give the familiar shape a new edge; even amongst scores of 360s, 430s and the odd Rolls-Royce Phantom that clutter up the streets of Monaco, it's the Superamerica that takes centre stage. Neat details like the new aluminium mesh for the gaping air intake and the flashes of aluminium around the headlights show the level of thought put into the Superamerica, but look beyond the trick roof and flashes of stylistic flair and there's plenty for the enthusiast to drool over. Our test car came fitted with the HGTC package, which includes much stiffer springing (35 per cent up on the front, 15 per cent at the rear), a 73 per cent stiffer rear anti-roll bar, a gloriously vocal sports exhaust and the biggest carbon-ceramic brakes you've ever seen. The standard 19in wheels barely contain the 398mm front discs and even the 360mm rears look fit to burst from behind the split-rim five-spoke alloys. The £14,455 upgrade takes the Superamerica well over the £200,000 mark, but over 40 per cent of customers have taken up the option and over 92 per cent of owners have foregone Ferrari's once aspirational open-gated manual 'box in favour of the paddle-operated F1 system. If you can get over the cost, our experience is that the HGTC package is worth the price of entry for the massive increase in body control and grip, and the phenomenal braking capacity of the Brembo carbon-ceramic set-up. Only the fitment of unique Bridgestone Potenza RE050As on the Superamerica, instead of the more extreme soft-compound Pirelli P Zero Corsas usually found on a HGTC-equipped 575, hints that perhaps the Superamerica isn't quite as focused as the coupe. Fortunately the Route Napol