On the 30th anniversary of the legendary driver's death, Ferrari has held a special celebration at the Fiorano test track. Video and gallery here 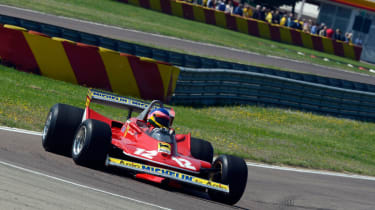 On 8 May 2012, Ferrari paid its respects to one of the world's most famous racing drivers, and former Ferrari race winner Gilles Villeneuve, on the 30th anniversary of his death.

The special event saw Villeneuve’s mechanics, his widow Joann and their daughter Melanie meet at the Fiorano Ferrari test track, where former F1 World Champion and son of the great man, Jacques Villeneuve, had the chance to drive the legendary 312 T4 around the track.

Villeneuve's special commemoration was organised by Ferrari as a tribute to the Canadian driver who raced for the Maranello Scuderia from 1977 until he died tragically during qualifying for the Belgian Grand Prix on 8 May 1982.