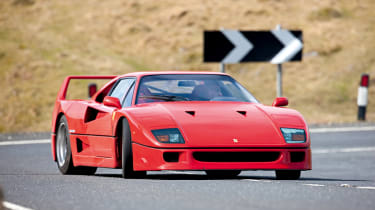 It isn’t hard to argue that the F40 is the greatest roadgoing Ferrari of all. The most exciting, the most focused, the most rewarding. In some ways, the shape said it all: fabulously functional and shorn of pretty much everything that didn’t add to its speed and dynamic acuity.

Ferrari threw together the F40 in 12 months. Officially, it was to commemorate the company’s 40th birthday in 1987, but everyone knew it was really revenge for Porsche’s audacious act of one-upmanship with the 959. The F40’s mid-mounted twin-turbo 2.9-litre V8 developed 478bhp. With a power-to-weight ratio of 441bhp-per-ton and almost 911-compact dimensions, its fusion of speed and size made the new Porsche supercar look vaguely unresolved. The 959 did sixty in about four seconds, the F40 went comfortably under; the 959 wouldn’t quite do 200mph, the F40 did 201mph.

And, of course, the lean 1100-kilo kerb- weight had more than a little to do with it. So a tubular spaceframe, yes, but clothed in carbonfibre and Kevlar – perhaps the earliest manifestations of true F1 transfer.

Few supercars at the time – including even the McLaren F1 – felt as fast as the F40. It had something to do with how violently the turbos suddenly ramped-up the power. There was an intensity about the way the F40 accelerated that caught the breath every time. And could seem overwhelming. Yet it wasn’t. The compass of the chassis coped, however white-knuckled your wheelmanship. It was the fabulous steering, the tremendous grip, the blackout brakes, the surprisingly progressive breakaway…

The F40 cost more than twice as much as a Testarossa and, originally, Ferrari had intended to make just 450, but worldwide demand was so strong, production eventually hit 1311 in 1992 when Maranello finally called ‘time’.