Fisker has revealed its second petrol-electric model, the Surf, at the 2011 Frankfurt motor show 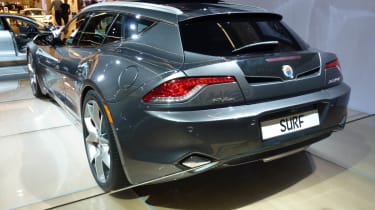 Electric carmaker Fisker has unveiled a second model at the Frankfurt motor show. The Surf based on the Karma range-extended EV that we’ve already driven and is described by Fisker as ‘a unique cross between a luxury sports car and a station-wagon.’

It shares its battery-holding ‘backbone’ chassis with the Karma saloon, with the design offering more than a hint of Ferrari FF. It’s been designed to offer additional load capacity, although despite the extra space it’s still a strict four seater due to the need to accommodate the 20kWh battery pack.

Like the Karma, drive is supplied to the rear wheels by two electric motors driving through a shared differential. Power comes from either the onboard battery pack, or by a 2.0-litre turbocharged petrol engine turning a generator. The current motor is a GM four-cylinder unit, but Fisker has recently confirmed that it has signed an agreement with BMW to supply its engines for the smaller Nina saloon, set to be launched in 2013.

evo’s Mike Duff said the Karma was ‘the most real-world realistic electric car we’ve driven so far’ and the addition of the Surf to the range will only serve to broaden its appeal.    Click here for the rest of evo's Frankfurt 2011 news