On an unintentional economy drive, the Mustang managed over 24mpg on one 300-mile journey 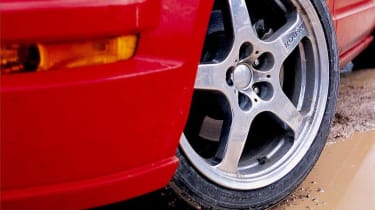 No, the new fuel tank still hasn't been fitted, but I have a good excuse: as predicted last month, we've chosen some uprated brakes, so rather than make two trips to Litchfield Imports we've delayed the fitting of the tank until the much-needed brakes have arrived. After much deliberation we decided to go for the German-made Movit front brake kit. Though less well known in the UK than familiar names like AP, Brembo and Tarox, Movit has a strong reputation in mainland Europe for its wide range of upgrade kits for everything from Minis to Mustangs. It even does ceramic discs for certain applications. Take a look at www.movit.de P555's £2400 kit promises vastly improved pedal feel and stopping power thanks to a pair of 342mm vented and cross-drilled discs and some fist-sized four-pot billet callipers. And as all Movit's hardware is subjected to Germany's stringent TÜV tests, it should be top quality stuff, too. In the meantime I'm having to nurse the Mustang's knackered standard brakes, which now rumble and judder during sustained high-speed stops. There is a silver liniag, though, for the combination of infernal fuelling issues and shot brakes mean I've been on something of an economy drive, seeing a best of 24.2 mpg on one 300-mile motorway journey. Rest assured I'm anticipating that normal gas-guzzling service will be resumed soon.