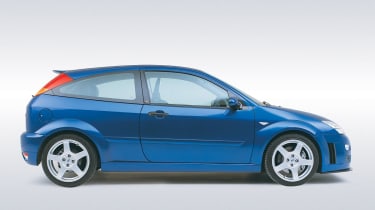 History is important when choosing a Focus RS, and here we are referring to more than just the service book. The life an RS has led will affect its fitness, with cars that have seen plenty of track action feeling sloppy compared with cherished examples. Ideally you should be looking for a vendor who uses their RS as a second car. The good news is that generally there is very little that goes wrong with an RS if it is properly maintained, helping to keep running costs low.

EnginesAlthough the engine has been badged as a Duratec, it is in fact a turbocharged version of the 2-litre 16-valve Zetec ‘E’ unit found in more humble Focus models of the same era. Reliability is strong, and thus far we have not heard of any failures on unmodified engines. The same can be said for the standard Garrett GT 2560 SG turbocharger.

Unsurprisingly, there are a lot of tuned engines around, with some running as much as 280bhp with the standard internals and turbo without any problems – which says a lot for the strength of the unit and blower.

The Superchips ‘Bluefin’ is the most popular choice amongst RS chippers, providing big gains for around £500. There are plenty of owners who have made further aftermarket changes, including induction systems, tubular manifolds and uprated turbos and charge-coolers. There are a few RSs around boasting 400bhp…

Blowing up your motor by over-stressing it is not advised, though, because Ford has now stopped building these engines, while a new turbo will cost around £1000.

Like all Zetecs, this engine is sensitive to the type of oil it is lubricated with. It is very important to use the recommended weight and viscosity – either semi-synthetic 5w-30 or, for hard driving and track use, fully synthetic 10w-40.

Coolant leaks are quite common, particularly around the thermostat housing (check for pink stains). Some owners have also had the bonnet lining come away from the skin.

ExhaustThe RS exhaust is a fairly simple big-bore stainless-steel system. From the cat back it is usually problem-free, but this hasn’t stopped quite a few owners changing to an aftermarket exhaust in search of added volume and improved tail-end looks. The most popular replacement item (which is also usefully lighter) is made by Milltek Sport, but Mongoose is another common fitment.

The catalytic converter can sometimes become problematic and fail because of contamination. This is especially common if an atmospheric dump valve has been fitted, since it causes over-fuelling, the excess making its way into the cat. A replacement Ford cat is over £800, and supply is very limited, so many owners choose to fit either an aftermarket high-flow sports cat (around £450) or a de-cat pipe (around £160). Obviously, the de-cat would fail an MOT, but it adds a respectable amount of power and torque, so quite a few RS owners choose to run this way.

Gearbox/clutchThe gearbox has proved itself to be reliable and strong. Essentially it’s the same MTX-75 five-speed unit used in the rest of the Focus range, although the ratios have been altered, the internals shot-peened to increase their strength, and there’s a new gasket for the casing. Those small changes have worked well enough to cope with chip upgrades. A few high-mileage examples have suffered selection problems with first or reverse, but in most cases this has been caused by too much gearbox oil or poorly adjusted linkages.

The clutch, made by AP Racing, is a pretty hefty unit that feels a little heavy underfoot. It should last for at least 40,000 miles if not abused.

SuspensionThe RS runs the same wide-track settings as the WRC car, along with increased negative camber, an 18mm anti-roll bar and Sachs racing dampers. Despite the high workload placed on the suspension, it’s rarely found wanting. The only common problem is bushes that wear more quickly than you might expect. This is identified by a knocking noise heard over bumpy roads.

Wheels/tyresThe lightweight OZ Racing five-spoke alloys are strong, but due to the extended track it’s not uncommon for them to have been scraped along a kerb. Look out for this damage and signs of poor-quality repair work. The original factory-fit 225/40 R18 Michelin Pilot Sport tyres are no longer made, having been superseded by the improved Pilot Sport 2 version. Front tyres can wear out rapidly if the car is driven hard but, being a common size, prices are reasonable.

In an effort to save weight there is no spare wheel, so under the boot floor there should be a wheel-sized polystyrene blank, with recesses for a Ford tyre-foam puncture repair kit.    BrakesBrembo four-pots and 324mm ventilated discs are standard issue at the front of the RS, while at the rear you’ll find the two-pot callipers and 280mm discs from the ST170. Pad wear is high, mainly because these cars are usually driven hard, but replacements are not overly expensive. Most owners choose not to refit Ford pads, though, as aftermarket upgrades can be bought for less. Ferodo DS2500 pads are a popular choice, costing around £100 for a front-axle set.

Trackday goers often upgrade the brake fluid, but for road use the standard Ford choice is well up to the task. Some of the more dedicated track drivers have upgraded the brakes themselves, with AP Racing six-pots and floating discs the favoured items.

BodyworkThe unique front splitter hangs quite low on the RS, making it vulnerable to grounding on kerbs and bumps. That’s something you won’t want to do, as a replacement will set you back £300. Paintwork tends to suffer over time, too, as it’s soft and therefore prone to stone-chips and scarring. Respray work is quite common on the nose and splitter of cars that have covered more than 20,000 miles. The rear wheelarches were originally covered by a protective film, but often this has been removed as it can look tatty when damaged. Replacement film costs around fifty quid.

InteriorThe RS’s interior is one of those ‘love it or hate it’ cases. The dashboard and carpets are standard Focus issue, but everything else has been changed. Most noticeable are the blue and black, suede and leather Sparco seats, which are both comfortable and supportive.

These cars originally came with grey ‘RS’ branded floor-mats, which should be present, as should the leather case for the owner’s manual.

The whole cabin is tough and should be rattle-free. The only common problem with the interior is with the Ford 6006e 6-CD changer, which came fitted as standard. Some units develop a problem that makes them drain a fresh battery in a handful of days. However, this can be cured free-of-charge by Ford dealers.