Ford takes on Ferrari and wins? Well, it had already happened once before… Say hello to the 2004 Ford GT. 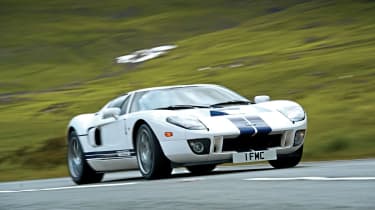 So was the 1960s Ford GT40 the original supercar? Ford clearly thinks so. In 2004 it made good on its promise that the iconic old-timer would ride again by launching the Ford GT, a car with which to bait and beat Ferrari, just as the original had done all those years ago.

The Ford GT looked just like the ’60s Le Mans legend it paid tribute to. That was important; shapes really didn’t come much better. But it wasn’t a replica, being bigger in every direction.

The entire body (save for the glassfibre engine cover) was made from lightweight aluminium and it clothed a substantial aluminium spaceframe structure, on which forged aluminium wishbones were hung at each corner.

Power came from a quad-cam 5.4-litre V8, supercharged to 550bhp with a colossal 500lb ft of torque. The power-to-weight ratio of 353bhp per ton was hardly less impressive. From rest to 100mph took just 7.8sec and the top speed was 205mph. A GT40 simply wouldn’t have been able to keep up.

No doubt about it, the motor was a monster. Not sharply aggressive but progressive and linear, with an absolute wall of power from no revs to 6500rpm.

The gearing was extraordinary too, with second and third good for almost every situation. You could leave it in second on the exit of a 30mph limit, floor it and just a few seconds later be doing over 80mph. If you wanted to savour the experience a little more, do the same thing in third and you’d slam up to 130mph and beyond before you needed another gear.

The chassis, meanwhile, felt so composed that you couldn’t help but revel in its ability and security. Few of the GT’s supercar contemporaries felt so devastatingly rapid and yet so unerringly friendly, and in 2005 the Ford beat all rivals to be evo’s Car of the Year.