We were bitterly disappointed to discover that the new Civic Type-R isn’t as polished as the Golf GTI, nor as raw and exciting as the Renault Mégane R26 when we first got our hands on it on UK roads (evo 102). However, it seems that Honda fans needn’t be too despondent just yet as there’s a much higher-spec Civic Type-R on sale in Japan. And thanks to performance specialist Litchfield Imports the new hardcore Type-R is now available in the UK from £22,995.

Based on the domestic market four-door Civic, this Type-R has a development of the Integra Type-R's K20A 2-litre i-VTEC engine with 222bhp (5bhp up on the also Japan-only Integra DC5) and 159lb ft – produced nearly 1000rpm lower in the rev-range. That’s well up on the 198bhp and 142lb ft of the official UK-market Type-R. Honda in Japan claims it will hit sixty in under 6 seconds and, thanks to aerodynamic improvements, run on to over 150mph.

However, there's more to it than straight-line speed; the Civic Type-R four-door has been developed on the Tsukuba, Suzuka and Nürburgring racetracks. The spec is astounding: a helical limited-slip diff; a lighter, 50 per cent more rigid bodyshell; 320mm-diameter Brembo brakes; shorter ratios for the first three gears and slightly longer ratios for gears four-six; and lower, stiffer suspension – crucially it has double-wishbone rear suspension rather than the UK car’s cheaper and less precise torsion beam set-up. The Japanese spec also includes super-sticky 225/40 R18 Bridgestone RE070 rubber, a tyre that was first seen on the NSX-R.

The results sound startling – the Civic is 4 seconds quicker around Suzuka than the Integra Type-R, and at Tsukuba it gets to within a second of a standard NSX. We’ll find out how it copes with UK roads later this year. 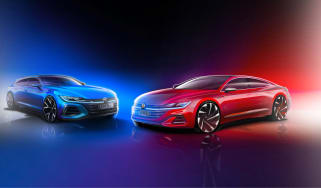