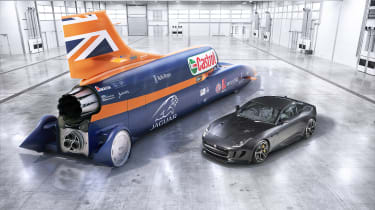 Jaguar has used the launch of an all-wheel drive version of its F-type R sports car to announce a partnership with an entirely different breed of British performance car – Bloodhound SSC.

Jaguar and the British World Land Speed Record Team have entered into a ‘major technical partnership’ that has already seen the all-wheel drive F-type R assist in calibrating communications systems for The Bloodhound Project.

During the test in South Africa’s Hakskeen Pan desert, an F-type was driven at top speed towards a fighter jet flying just 50 feet above the ground at 500mph. The near-700mph closing speed allowed both vehicles to serve as a test-bed for Bloodhound’s vital communications equipment.

Should all go to plan during the actual record attempt Bloodhound SSC could top 1000mph – comfortably eclipsing the current record of 763.035mph, set by Andy Green in Thrust SSC, in 1997. Andy will also pilot Bloodhound in the new record attempt.

Richard Noble, former World Land Speed Record holder and Bloodhound Project Director, took to the wheel of the F-type for the test. Noble says he’s ‘absolutely delighted’ with the new partnership, adding ‘Jaguar is very strong on innovation and with its huge drive in advanced technology, education and motorsport track record, we have the perfect partner.’

All-wheel drive ensured the F-type was more than up to the task of driving along the desert surface, while the extra traction it generates means the F-type R now reaches 60mph in 3.9sec (down from 4.2sec). Top speed is limited to 186mph.

The full range of F-type models will go on display at the upcoming Los Angeles auto show, which opens to the public on November 19.