Vilified at birth, Jaguar’s XJ220 is now recognised as one of the supercar greats 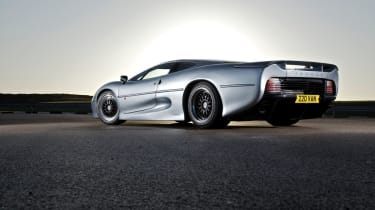 One of the most extraordinary and beautiful cars ever to reach production, the world’s first hypercar (hitting close to 220mph while the McLaren F1 was still climbing off the drawing board) was vilified at its birth in 1992 for not having the 500bhp V12 engine, four-wheel drive and scissor doors promised in the concept and, at nearly 7ft wide, being too big for British roads.  That it ended up with an even more potent (542bhp) twin-turbo V6 and lighter, rear-drive powertrain didn’t cut much ice back then, though ironically the approach would have garnered more acceptance now. The XJ220 was regarded as something of an over-sized freak, an outsider that was never invited to join the cosy supercar cabal.

The child of a collaboration between Jaguar’s so-called ‘Saturday Club’ – an informal group of engineers, including engineering chief Jim Randle, who’d get together after hours to develop pet projects – and Tom Walkinshaw’s TWR Engineering, the genesis of the XJ220 formed around Randle’s idea to make a lightweight, mid-engined two-seat Jaguar that would eclipse the Ferrari F40 and Porsche 959. In the event, only 281 XJ220s were made between 1992 and 1994 against a projected production run of 350. The motoring press loved it, but commercially the XJ220 was a fiasco.

A lot of the blame was laid at its Metro 6R4-derived V6 – and its sheer girth. True, there were things you had to adjust to in the XJ220 – size, turbo lag, steering that initially seemed heavy and unresponsive, strong understeer in the tightest bends, brakes that weren’t really up to the job – but, learn its ways, and it was actually well poised, translating serious stonk into stunning speed across the ground through a polished fusion of grip, neutrality and benign adjustability. If only it hadn’t been so wide.