evo's Harry Metcalfe rides in the new Jaguar F-type, and senses a bit of a sports car revolution 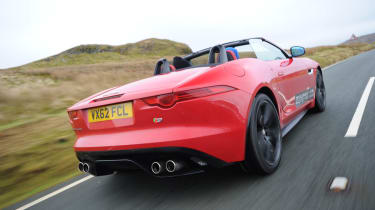 What is it? We’ll finally get to drive the new Jaguar F-type in April. But Jaguar offered us a ride in the car first, and while you learn way more from the driver’s seat, when it’s a key car like the F-type, it’s well worth grabbing every opportunity you can.  Making things even more interesting, Jaguar brought along both the V6S and V8S versions, chaperoned by the engineers responsible for taking the F-type from concept to production.  The F-type's tech specs Starting with the basics first, the £67,500 V6S gets the new supercharged 3-litre V6 producing 375bhp and an impressive 399lb ft of torque, while the £79,950 V8S has the latest version of Jaguar’s supercharged 5-litre V8 delivering a monstrous 488bhp and a healthy 460lb ft from 2500rpm onwards.  Drive to the rear wheels is via the new 8-speed ZF automatic gearbox (mounted directly behind the engine) and it’s engineered to give quicker, more aggressive changes than in other Jaguar models. And where the V6S has a passive locking rear differential, the V8S gets the active electronic differential we first saw in the XKR-S.  Finally, the F-type’s body is all aluminium, giving the V6S a kerb weight of 1614kg while the V8S is slightly heavier at 1665kg, but much of this difference is due to all the extra equipment you get as standard  (bigger wheels and tyres, 18-way adjustable sports seats). What’s it like in the metal?

The Jaguar F-type has got a lot more presence than I expected, it looks smaller too and it’s certainly distinctive. I love the quad exhaust tips emerging from the elegant rump of the V8S, compared to centrally mounted twin exhausts on the V6S.  I go in the V8 version first and climbing in I’m struck by how ‘sporty’ the F-type cabin feels. My driver is Erol Mustafa (who headed up the F-type engineering team) and he explains that while the seats are very similar to those in the XKR-S, the seat squab is tilted back by a further six degrees, giving it more of a ‘bucket seat’ feel. There’s loads of legroom up front and there’s a giant grab handle on the centre console.  As Erol starts to enjoy the challenging roads in this part of Wales, you won’t be surprised to hear the V8S feels stonkingly fast. Mercedes SL63 AMG fast in fact. The chassis seems well up to the challenge to transmitting all that power to the road. There’s a sonorous V8 snarl coming from those quad exhausts behind me, quickly replaced by pops and crackles as Erol either lifts for a corner or goes for a downchange. I wasn’t expecting this rumpus at all. I kept being told the V6S was the pick of the range but after this experience, I’m not so sure that’s the case. We swap cars in Bala and I then head back in the V6S F-type along the same route as we’ve just come from. This time my driver is Mike Cross and he’s keen to show me why he thinks the V6S is the more balanced car of the two. The first thing I notice is it sounds completely different, possessing a six-cylinder howl that’s near-identical to the sound you get in the Porsche 911 (funny that), the only difference being the F-type doesn’t rev as highly. The V6S has a shorter diff ratio than the V8S too, meaning the engine is always spinning faster for any given speed and I sense from the way Mike is driving that you need to keep the V6 more on the boil to make the sort of progress that came so effortlessly in the V8S.  I’m also pleased to report that buffeting at speed is kept to a minimum (something that the 911 Cabrio has always suffered badly from), thanks presumably to the tall tail and high-backed seats. What are the new F-type’s rivals? I can sense the V6S F-type has been targeted directly at the Porsche 911 Carrera, as it sounds incredibly similar and all the important performance claims are closely matched. The one important differentiator, though, is price; a standard V6S F-type is over £13,000 cheaper than a 911 Cabrio but from where I’m sitting, it doesn’t feel cheaper in any way. But it’s the V8S F-type which is the more intriguing. The engineering team seems to prefer the V6S but I believe that’s only because it’s the one more rounded in its abilities. The V6 engine doesn’t dominate the driving experience like the V8, but if you prioritise excitement, then look no further than the supercharged V8. First ride conclusion A proper two-seater Jaguar sports car is finally here. And it’s the 488bhp V8S that I’m most excited about. I can remember being shocked when the Mercedes SL55 AMG first arrived. At that moment, everyone had to change their minds as to what the SL was all about, and I sense the same thing is about to happen for Jaguar – the 186mph F-type V8S is properly nuts. Bring on April.

Video of Harry's first ride in the new Jaguar F-type Roadster below...