The revised XKR has been almost overshadowed by the XFR, but it’s a great car 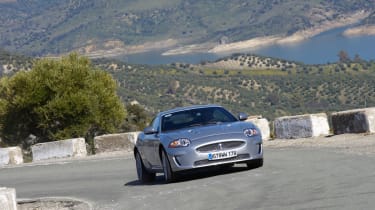 There’s a tendency to think of the new Jaguar XKR as a contractual obligation rather than a fresh initiative. You know how it goes. XFR hogs the headlines with its shiny new 5-litre supercharged V8 and hi-tech underpinnings – XKR gets the same drivetrain and chassis updates but as a fortuitous spin-off rather than measures implemented at the leading edge of its development. But that would be to seriously underestimate the XK’s importance to Jaguar. It might be the old man of the line-up but it by no means bows to the XFR and has been configured to deliver a different driving experience to its saloon sibling.

There’s a crucial relationship between cross-range harmony (the family DNA, if you like) and model differentiation. It’s particularly interesting in this case because the current- generation XK has been the touchstone for so much of the cross-range development work that has come downstream of it.

What does it offer that the XFR doesn’t? Beyond the obvious points – two fewer usable seats, more stares from the street – it’s the logical extension of the XK’s sporting personality, a car that applies some bias to the broad repertoire of abilities so meticulously balanced in the XFR. In short, it’s lighter, a little faster, a little louder when pressing on, more responsive (throttle, steering, brakes) and more playful in Dynamic mode, allowing slightly more mobility of the tail within prescribed limits before the electronic safety net is deployed. In cold figures, the power/weight ratio jumps from the XFR’s 270bhp/ton to 291bhp/ton and the 4.6sec 0-62mph time shaves a tenth from the saloon’s. 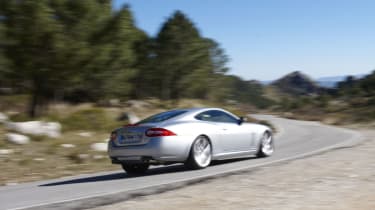 Naturally, there’s some rationalisation, too. Apart from sharing the terrific new 5-litre supercharged V8 (503bhp at 6000-6500rpm, 461lb ft at 2500-5500rpm), the exterior and cabin have been treated to a similar ‘R’-style makeover with a new aggressively ducted front bumper, LED tail-lights and, on the inside, the adoption of the XF’s centre console rotary gear selector while, cosmetically, the mix of dark wood and aluminium trim apply the necessary sporting tweaks to the ambience.

Even setting off from the hotel car park at the launch, the XKR’s sharper character is immediately evident. With just a light prod of the throttle that would have seen the XFR step briskly but unremarkably into Seville’s morning throng, the XKR leaps forward with genuine brio and a small chirrup from the tyres. Braking to a perfectly smooth stop isn’t as easy, either. It’s as if the XKR is straining at the leash, yearning for a stretch of open road. Even at this stage, it feels tauter and more eager than the saloon.

Confirmation that it is comes soon enough as we strike out for Grazalema and Ronda. Whereas the XFR is a willing accomplice in any raid on three figures, the XKR positively eggs you on. And if you want to know how the new, blown V8 really sounds, this is the place to hear it. Thanks to the Ferrari-style active exhaust valve, it has a fine, gravelly timbre that went completely unsuspected in the XFR. 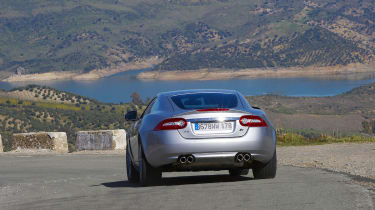 As with the saloon, though, the astonishing torque delivery defines the quality of the performance. Using the paddles to flick between third and fourth delivers punishing thrust for what seems like just a handful of revs. Anything much more than half throttle and the acceleration acquires a sustained weight rarely experienced outside an airport runway.

The XKR feels a little edgier and harder than the XFR but still rides with great composure. Turn-in has real bite and conviction, mid-bend responses are beautifully clean and crisp and damping control is simply sublime. Equally impressive is the transient behaviour. The intestinal S-bends that characterize the CA9104 between Grazalema and Zahara present no problem at all; the Jaguar shifts its weight with the lithe precision of a world-class downhill skiier. Great as the XFR is, the XKR sounds better, goes that bit harder and, on the right road, is more fun. It’s the best car Jaguar makes. 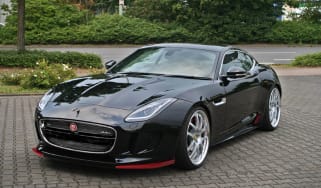 Tuning specialist Arden has given its own twist on the F-type Coupe, with various styling upgrades, and an uprated supercharger kit. Details here
Visit/jaguar/xkr/13949/jaguar-e-type-lightweight-revealed 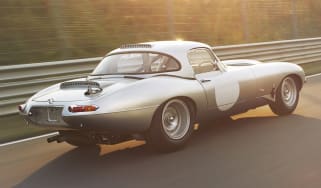 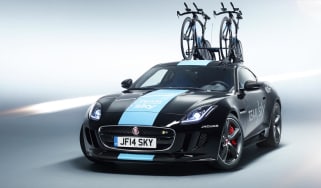 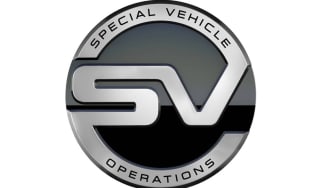 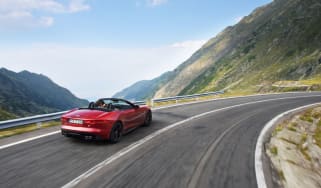 evo goes in search of the world's best driving road, starting with a Jaguar F-type on the Transfagarasan highway in Romania. Video here
Visit/news/evonews/292138/david_brown_speedback_gt_apes_db5_costs_500k.html 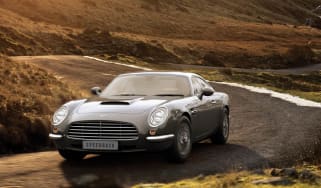 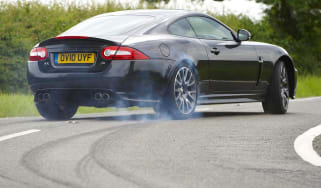 Time has been called on Jaguar XK and XKR production. Our picture gallery charts the model range's history
Visit/jaguar/xkr/13580/jaguar-f-type-r-tops-coupe-range 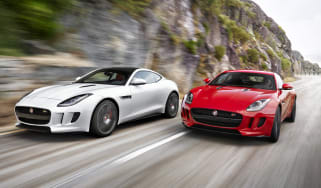 The Jaguar F-type Coupe is official at last, the range topped by the 542bhp F-type R
Visit/news/evonews/291256/la_motor_show_2013_roundup.html 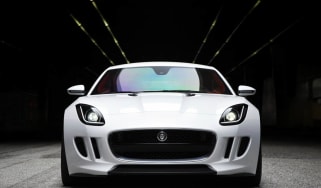 All the stars and highlights from the 2013 Los Angeles motor show, including the Jaguar F-type Coupe and Porsche Macan SUV
Visit/jaguar/xkr/7268/jaguar-f-type-project-7-review 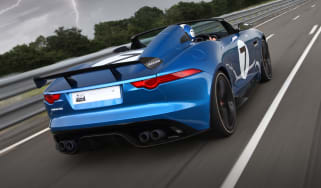 The Jaguar F-type Project 7 is a roofless speedster concept with a big power rise. Even more exciting?
Advertisement
Visit/jaguar/xkr/13397/jaguar-xkr-s-gt-coming-to-the-uk 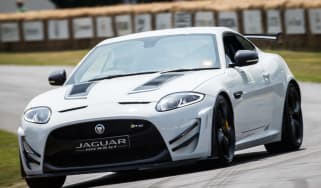 The Jaguar XKR-S GT is the most extreme version of Jag's XK coupe yet, and it's now going on sale in the UK. Full details here
Visit/jaguar/xkr/14102/jaguar-f-type-v6s-v-porsche-911-cabriolet 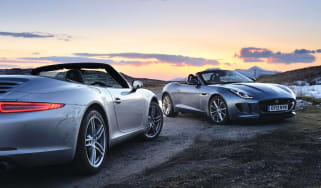 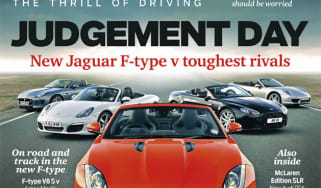 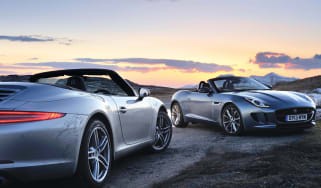 Tiff Needell gets the new Jaguar F-type alongside a Porsche 911 at Bedford to see which is the most fun on track. Video action here
Visit/jaguar/xkr/7228/2013-jaguar-xkr-convertible-review-and-pictures 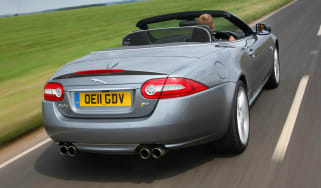 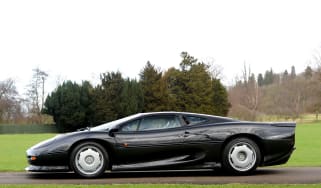 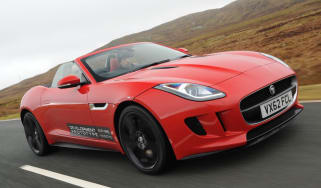 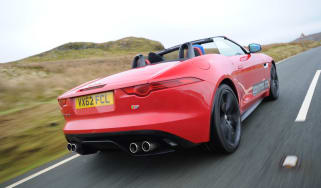 evo's Harry Metcalfe rides in the new Jaguar F-type, and senses a bit of a sports car revolution
Visit/jaguar/xkr/12960/jaguar-xj220-tuned-by-overdrive-ad 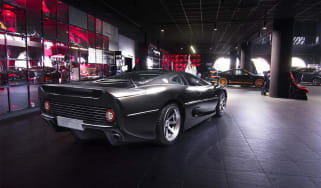 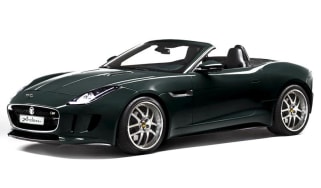 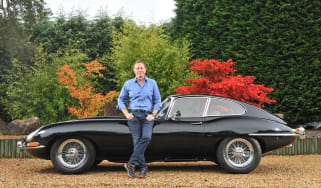 Martin Brundle and his Eagle E-type

We meet Martin Brundle and his gorgeous Eagle Jaguar E-type. Plus Ferraris, Goodwood Revival and his surprising first car
Visit/jaguar/xkr/12418/new-york-show-jaguar-f-type 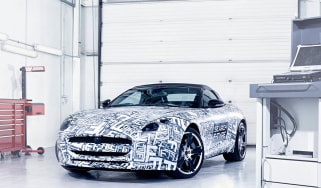 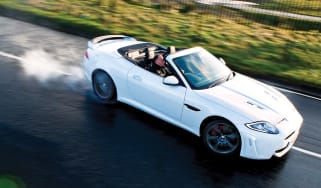 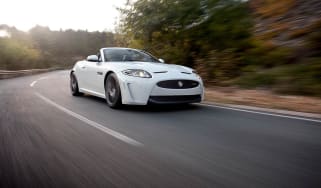 Jaguar has produced a soft-top version of the mighty XKR-S - but is it as good as the XKR-S coupe? evo's Henry Catchpole decides
Advertisement
Load More
Skip to HeaderSkip to Content