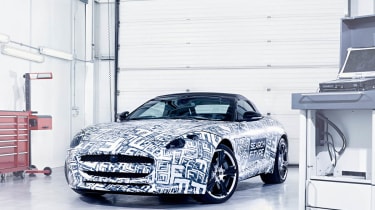 Jaguar’s new sports car will be called the F-type. The production version of the C-X16 concept is currently well into its development phase, and will wear the F-type badge that’s been touted to join the Jag range for over a decade. Just the final on-road test phase separates these camouflage-clad prototypes from showroom examples.

Seen by many as a spiritual successor to the E-type, it should be offered in both roadster and coupe forms, the former launching first (and previewed by this heavily stickered test car). ‘We expect the first cars go on sale by June 2013, so it makes sense to launch the convertible version first’ says Jaguar brand director Adrian Hallmark. ‘It's also the toughest version to engineer but with prototypes hitting the road this week, we are confident we'll be ready in time’. It won’t have a folding hard-top; this was considered, but the weight and packaging benefits of a canvas roof were too hard to ignore.

A strict two-seater, it’ll come in below the XK and XKR in Jaguar’s range; size-wise, it will sit between the Porsche Boxster S and 911 Cabriolet, and its performance and price-point should echo that – it’s expected to kick off at around £55,000.