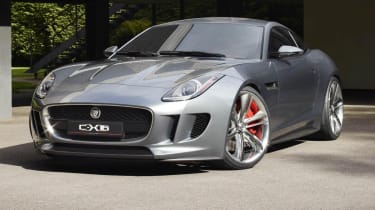 Debuting at Frankfurt next Tuesday, the C-X16 takes styling cues from the C-X75 supercar concept of last year.  Adrian Hallmark, Jaguar’s Global brand Director, has said the C-X16 ‘embodies the established Jaguar strengths of sensual design, animal-like agility and inspirational performance’.    The concept looks certain to fulfil its brief on the last criteria, with a hybrid drivetrain. The combination of a 375bhp, 332lb ft supercharged 3-litre V6 with a 92bhp electric motor should allow the C-X16 to accelerate from 0-60mph in 4.4 seconds and hit a top speed of 186mph. Despite this level of performance, which is akin to a V8 engined Audi R8, the CO2 emissions rating for the C-X16 is just 165 g/km. The Audi emits twice as much.    It is also unique in the world of hybrids as the electric boost is operated by a steering wheel-mounted button. Similarly to the KERS (Kinetic Energy Recovery System) technology used in F1, the C-X16 uses brake regeneration to charge a 1.6kWh battery pack. As well as being able to provide a 90bhp and 173lb ft performance boost, the battery pack also allows the C-X16 to be driven at up to 50mph without the help of the V6 engine. An eight-speed automatic gearbox completes the drivetrain. How much of this technology would make it to a possible production version remains to be seen, however.    Constructed from aluminium, Jaguar claims that the C-X16 is the smallest Jaguar created since 1954. It measures 4445mm in length, 2048mm in height and just 1297mm high. This makes it around 100mm longer than a Porsche Cayman but fractionally lower and wider. Ian Callum, Jaguar’s Chief of Design, says the C-X16 ‘is the very essence of future Jaguar performance’.

If the C-X16 makes production (we’d be surprised if it doesn’t) then it marks an exciting return to proper sports car for Jaguar. Judging by those performance figures, it’s more likely to take on the Porsche 911 than Cayman, costing upwards of £50,000.

Click here for all of evo’s Frankfurt motor show news