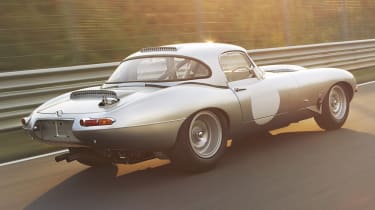 Ahead of its first public reveal at the Pebble Beach Concours, Jaguar has shown pictures of the ‘new’ Lightweight E-type. This is the prototype, with a further six continuation models to be produced. Jaguar recently confirmed that it would build the six ‘missing’ Lightweight E-types half a century after original production ceased.

Produced between 1963 and 1964, 18 race-bred E-types were planned to be built to take on the likes of the Ford GT40 and Ferrari 250 GTO on the race track. Just 12 were ever produced, however, so 50 years on Jaguar will build those six ‘missing Special GT E-type cars’ to original specifications, utilising the unused chassis numbers to finally bring the run to a close.

Production methods will mimic those of the 1960s, giving the 3.7-litre straight-six engine the same character and performance as those in the original all-aluminium racing cars. Producing around 344bhp and weighing just over a metric ton (some 114kg less than standard), the Lightweight E-type is claimed to accelerate from 0-60 in around 4.1sec and onto a top speed of over 160mph, making it one of the most capable GT racers of its time.

Customers will be able to customise their hand-built machine to their own specifications, the trim of the largely stripped out interior and exterior colour all open to customer input. Jaguar claims that 75 per cent of the aluminium body panels are made on sight at Whitley, with just a few of the larger pressing coming from other specialists.

This will be the first time Jaguar has ventured into a re-creation project, but not the first time a classic Jaguar has been reproduced. Eagle has created numerous E-types including the Eagle Speedster, a modernised version of the original E-type featuring AP Racing brakes, a wider track and a bored out straight-six engine, and the Low Drag GT, a car similar in appearance to Jaguar’s own lightweight model. But since Jaguar’s own Lightweight E-type will be built as it would have in 1963, the racer will conform to classic racing championship regulations such as those at Goodwood, ensuring it can be entered as a classic racing car – something the modified Eagles cannot do.

Jaguar hasn’t yet announced prices, but it is thought that they will cost around £1million. Jaguar has also confirmed that it hopes to sell the six cars to established Jaguar collectors and in particular collectors who race historic cars.