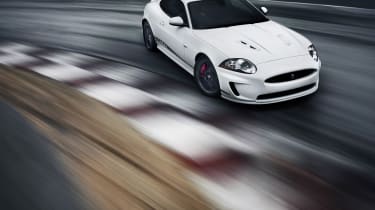 The speed limiter has been raised from 155mph to 174mph but the power and torque figures are unchanged from the standard car. A new front splitter and a larger rear spoiler help keep the car stable at the higher V-max. Meanwhile, if you spec the Black Pack then gloss black paint is added to the mesh grille and window surrounds. You also get 20in gloss black Kalimnos wheels.  What’s it like to drive?

Unfortunately I didn’t get the chance to test out the new limiter but I have absolutely no doubt that it will hit 174mph and still feel like it could easily go another 20mph faster. However, I did have a lot of fun reacquainting myself with the XKR. It feels ludicrously fast (much more so than the 0-60mph time of 4.6sec suggests)  and the sense of speed is heightened because it feels like it’s almost floating across the ground rather than absolutely nailed to it like, say, a GT3.

There are two buttons on the transmission tunnel that are worth pressing. The first disables the DSC and the second (with a chequered flag on it) engages ‘Dynamic mode’. With these pressed, the throttle response is scintillating – all the travel seemingly compressed into the first half-inch – and oversteer is delightfully easy to provoke and ride. Dynamic mode also gives the exhaust its extremely full voice.

Strangely on circuit the XKR actually feels slightly too twitchy with the nose reacting quickly and almost upsetting the tail at the same time. Bizarrely the XFR is actually more enjoyable as a track car as it is better balanced.

The ZF gearbox remains the best automatic available in any car on sale today. The algorithm which chooses when to change down gear in Sport Mode is uncannily, almost spookily good. How does it compare?

With both packs added, the Jaguar’s price is getting towards Aston Martin V8 Vantage territory. However, the XKR should in no way be thought of as the Aston’s poor relation - the ride is better in the Jaguar and the Aston will struggle match it for straight line pace too. Ultimately, it will probably boil down to how much you are seduced by the looks of the Vantage…

You can only get the £4000 Black Pack if you buy the £3500 Speed Pack. GT3 RS style body decals are an option with the Black Pack but were thankfully left off our car.