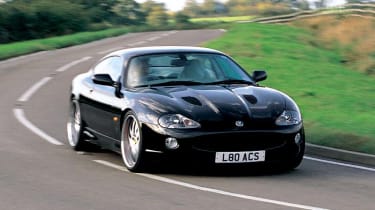 Everywhere you go, you catch people running their eyes over this dark, pebble-smooth XKR. Low-slung and slightly menacing on its glinting, deep-dished alloys, it's how the XK might have looked when Jaguar's stylists flourished their marker pens and came up with the original XK concept over a decade ago. In fact, this handsome limited-edition model is a final hurrah for the XK which will soon be replaced by the all-new model. Badged the 450 Typhoon, it has been created by Surrey-based Racing Green Cars, and just 20 will be built. The Typhoon's subtle bodykit and wide alloys are sourced from Arden, the long-established German Jaguar enhancer, for whom Racing Green is the sole UK agent. It also features lowered, stiffened suspension and a power upgrade that is said to lift the output of the XKR's supercharged 4.2-litre V8 from 400 to 450bhp. Twist the key and the V8 catches and throbs with a heavy but cultured rumble that's deeper, louder and more inspiring than the standard car's. Engine mods run to increased boost pressure, a new exhaust, sports air filter, remapped management and revised intercooling. At first glance, the interior appears standard, but closer inspection reveals there are some small but significant additions, including button switches on the back of the steering wheel. Press the 'Sport' switch on the centre console and you can use these buttons to cycle manually through the ratios of the six-speed auto; there's a red LED gear indicator nestled between the sunken dials which very neatly wears a matching aluminium bezel. There are two further switches in this car, lent by generous owner Andrew Smith. The first increases steering weight over the standard set-up by reducing assistance. The second isn't part of the Typhoon package but can be supplied by Racing Green and activates a water/methanol injection system that helps keep the engine cool and thus maintain its performance when, say, the XKR is running at sustained high speeds. There's certainly an uplift in performance with the Typhoon conversion, though the shove of the standard car was hardly lacking. The greater thrust doesn't quite breach the tipping point where acceleration goes from neck-straining to head- spinning but the Typhoon certainly feels more determined, especially into three figures. The dry whine of the supercharger still penetrates the cabin but it's now underscored by a satisfying, deep, bassy throb. Having easy manual control of the gears feels good, too, and if you do find the sudden need for maximum acceleration, kickdown will override your selection. Otherwise, once you've pressed the Sport button you are fully in charge of upshifts, as the engine limiter will remind you. After a couple of tries I decided that the weightier steering mode didn't really enhance the driving experience, being simply too heavy. The Typhoon is a more sporting drive anyhow with the firmer, shorter springs and the steering wheel gear selection. Despite appearances, the fat, split-rim alloys are re-shod with the tyres from the XKR's original 20in alloys. Even so, a firmer edge to the handling is felt almost immediately. You're much more aware of the quality of the road surface passing beneath the wheels but the new spring rates feel well chosen. There's still plenty of absorbency - the Typhoon never becomes crashy around town - and the extra stiffness pays dividends at higher speeds, with more tightly controlled roll and pitch. The set-up does seem to reveal the standard XK's ultimate lack of structural rigidity, most notably in long, bumpy sweeps. It's about as firm as you could take the chassis without getting into body bracing, and about as far as you'd want to go without losing too much of the XKR's everyday, long-distance comfort. Racing Green offers the package on the convertible XK but I can't imagine it works as well. The Typhoon has appeal, then; handsome, a little more energetic, well judged dynamically and offering more driver control and involvement. It'll be a rare sight, too, not least because the upgrade costs a fraction under £18K. Add a brand new XKR and you're up to £78K. That's a lot, but with the new XK just around the corner, there's no way you'd pay £60K for an old XKR. Racing Green reckons it can supply a new XKR and convert it to 450 Typhoon spec for a fraction under £70K, and will also convert a low-mileage pre-owned car. Still too rich for you? There's always the '400 Tempest' which foregoes the engine conversion, full exhaust and button shift and costs closer to £60K. That still might seem a lot for a car that's about to be superseded but there's no denying its head-turning abilities. As ever, exclusivity has its price.