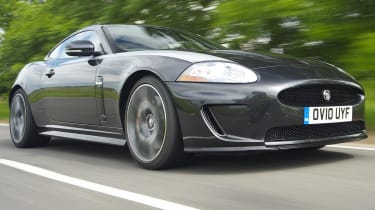 It's the naughtiest Jaguar in years – a special XKR coupe built to celebrate Jaguar's 75th anniversary and imbued with chassis and engine tweaks that transform the car's character.

The V8 engine gets a power boost, acceleration times are reduced and the suspension and chassis settings are revised.Technical highlights

The supercharged 5-litre V8 jumps from 503 to 523bhp and torque rises from 461 to 483lb ft. The aluminium chassis architecture is as rigid and as light as ever and the Active Differential Control and Adaptive Dynamics suspension remain.

Spring rates are increased (28 per cent stiffer at the front and 32 per cent at the rear), as too are the damper settings. Machined aluminium front and rear uprights are fitted, increasing camber stiffness by 25 per cent, and the ride height is reduced 15mm at the front and 10mm at the rear. The Adaptive Dynamics damper control software has been tweaked to suit.

The Jaguar XKR 75 is a fabulous thing. The engine, already a gloriously free-revving and punchy V8, feels further liberated by the mild tuning and delivers more performance than the stats suggest. Indeed, we wouldn't be surprised if the XKR 75 was pushing 550bhp...

Jaguar has also modified the 'acoustics package', which means that the exhaust sounds much more purposeful and aggressive. From the driver’s seat, the engine noise is more complex and multi-layered – the intake growl is more pronounced and you can just hear the supercharger spinning away.

However, it's the suspension modifications that make the biggest difference. The steering is urgent without being hyperactive – a characteristic Mike Cross, Jaguar’s chief chassis engineer, attributes to the new front uprights – and the balance, both front-to-rear and across the chassis, is simply sublime. The XKR 75 exhibits brilliant body control too, and despite overall increases in stiffness the ride remains comfortable and fluid.

With the stability control systems in standard mode, rear wheelspin is frequently and noticeably reined-in by the TC – it doesn't take more than a tickle on the throttle to activate the fun police. However, trust the chassis and your driving, flick to Dynamic mode, and the car comes alive. Fewer cars transmit front-to-rear grip levels as clearly as the XKR 75.How does it compare?

The XKR 75 is limited to a top speed of 174mph, 60mph comes up in 4.4 seconds (down from 4.6) and the bodywork gets a front splitter, extended sills, a rear diffuser and a larger rear spoiler.

The paint, 'Stratus Grey', is a new finish and red calipers are fitted behind a set of ‘Vortex’ 20-inch forged alloys. And very nice they are too.

The most important thing, however, is that this is not only the fastest production Jaguar ever (excluding the XJ220), it is also the best performance Jaguar in recent memory. If you want one, get in quick – Jaguar is limiting this very special car to just 75 examples.