Martin Brundle and his Eagle E-type

We meet Martin Brundle and his gorgeous Eagle Jaguar E-type. Plus Ferraris, Goodwood Revival and his surprising first car 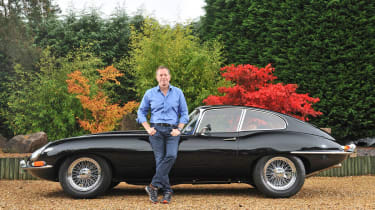 Martin Brundle on his Eagle E-type I’ve always loved E-types. My dad used to own ‘East Anglia’s leading sports car centre’, as he called it, and my mum would drop me off at school in an E-type. For me the E-type is the series 1 coupe; I’m not one for getting the roof down in a car, I prefer not to be on show like that. Henry Pearman at Eagle found a 1965 coupe and really went to town on it. It’s got a warmed up 4.2-litre straight-six with around 300bhp, a five-speed gearbox, it’s lower, there’s subtly tweaked suspension geometry, a stronger engine frame, and wider competition chrome wheels with much more modern tyres. Arguably the most important thing I had put on it was air conditioning – if you open up the windows you get exhaust gases in, so you need air con if you’re going to spend some time in it! What would I change on it? Very little. It’s got straight through pipes, which on a long motorway trawl can get a bit noisy. But that’s the only thing. It’s two and a half hours from home to the centre of London, and I wouldn’t hesitate in taking the E-type. I’m happy to take it out in the rain; it’ll clean! If you’re just going to babysit it there’s no point having a car like this. Full story on Martin’s Eagle E-type in evo 177, on sale now On his first car All my first cars were Toyotas as we had a dealership – my very first was a Corolla Coupe SR; it was a write-off with the front knocked off it. My dad said if you can fix it, you can have it. Which I did, and I got the Wolfrace wheels and fur interior, as you did when you were at college! On his Ferraris I had a Dino 246 about 20 years ago which was absolutely beautiful; I don’t know why I sold that! Though it actually wasn’t very nice to drive. I took delivery of it, rang Mark Blundell up and said ‘let’s go out in it, two MBs do London’. By the time I’d picked him up it was wet and I’d already nearly skated off the road, there was no ventilation, by the time we got to London I was ready to just park the thing. I remember coming home late from work one night in 1997 in my Ferrari 355 GTB. I’d had such a thrilling ride home that I sat in the car burbling on the driveway and thought ‘I’m going to go back out and do that again!’ I remember trying a 348 and thought it was one of the worst cars I’d driven in my life. I had a 360 which I didn’t like at all, whereas I thought the 550 Maranello was a great car, I really enjoyed that. It got written off at a set of traffic lights by a lady  - working her first day at a Land Rover dealership - who’d been sent out to buy stamps and ended up bending my 550’s chassis!  I had a 599 GTB until recently. It was a bit like having a superbike, it requires inappropriate speeds for it to come alive. Also, it doesn’t shrink around you like I think some cars can and should; it doesn’t surprise me they’ve made the F12 smaller.  On the Goodwood Revival I first drove Goodwood Revival with Jack Brabham in ‘CUT 7’, the registration number of a very famous lightweight E-type. It was a scary experience – I went out and thought it had four punctures there was so little grip. I couldn’t keep up with Jack’s pace, even though he was in his 70s. He obviously just thought it was a normal level of grip!