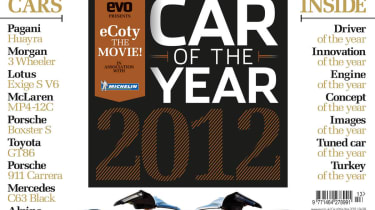 Buy a copy of evo 177 in our online shop

NewsMore details on the Porsche 918 Spyder and a drive in Lotus’s Evora 414E: the hybrid that’s quicker than a Diablo ColumnsRichard Porter whines about pricey options lists, Harry Metcalfe celebrates the quality of modern cars and Tiff Needell laments the careers he could have had First drivesAmong the cars under the evo microscope this month are the McLaren 12C Spider, Jaguar XF Sportbrake, Porsche 911 Carrera 4, 2013 Aston Martin DB9 and Audi R8 V10 Plus

LettersAn attack on Aston Martin’s questionable design philosophy, a homemade BMW art car and an inquisition into our film-maker’s spending habits ECOTY 2012After driving 174 new cars in the last 12 months, we’ve whittled them down to the ten that have entertained, impressed and intrigued us most. These are the only cars talented enough to have a hope of being etched into evo’s history. And yes, there’s a 911 in there. The journey to find evo’s Car of the Year 2012 starts at the Blyton Park circuit, before heading north to the beautiful Scottish Borders…

Driver of the yearOur review of 2012 kicks off with its most celebrated racing drivers, and one very inspirational Man of the Year. We also meet a potential Driver of the Year of the future…

Concept of the year2012’s motor shows have teased us with unrealistic concept cars as usual, but one stands out. It’s got a proper drivetrain under the skin, and it looks gorgeous

Images of the yearevo’s camera-clutchers travel far and wide, hang bravely out of cars and drink all manner of questionable energy drinks to bring you the best pictures in the business. Here are our favourites from the last 12 months

Turkey of the yearBad cars are fortunately rather rare these days, but that doesn’t stop some of them from seriously upsetting us. Step forward the Turkey of the Year (and its champion credentials). Plus our favourite tuner car, and 2012’s most scintillating statistics

Range Rover in AfricaHarry Metcalfe finally gets his hands on the new Range Rover, and takes it just a little bit out of its normal territory as he goes barrelling over sand dunes in the Moroccan desert

Tesla in the ArcticYour phone’s battery will drain itself far quicker in sub-zero conditions. So what happens to an electric car? John Barker finds out – by maturely drifting a Tesla Roadster Sport on a frozen lake

Long-term testsRichard Meaden gets a white car to match his caravan while we wave goodbye to our Suzuki Swift Sport evo knowledgeJust £35,000 can buy you a former eCoty champion and one of the fastest cars we’ve ever tested – the mighty Nissan GT-R Fantasy garageYour challenge - buy a mid-engined supercar, a four-seater coupe and a classic for £80,000. How would you spend yours? Me and my carMaster of the microphone-wielding grid walk Martin Brundle and his unique Jaguar E-type

Buy a copy of evo 177 in our online shop