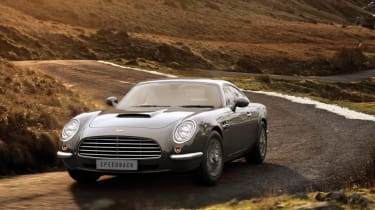 Meet the David Brown Speedback GT. It’s another entrant in the modernised-classic genre – see also Eagle’s E-types and Singer’s 911s – but rather than fine-tuning old technology, there’s a modern car lurking underneath the retro skin.

While its styling imitates cars of the 1960s, the Aston Martin DB5 in particular, its drivetrain comes courtesy of the Jaguar XKR. David Brown Automotive takes the XKR’s powertrain and rolling chassis and attaches its own hand-crafted aluminium panels to the structural hard points.

Various parts of the GT’s design have been created with 3D scanning and printing, while a more traditional hand-applied primer, paint and lacquer process accounts for the 120 hours that go into perfecting the car’s exterior finish. No weight figure has been announced, but with the quoted 4.6sec 0-60mph time identical to the XKR’s, something close to the Jag’s 1678kg is likely. Top speed is limited to 155mph.

David Brown Automotive is funded by and named after a British businessman who is not related to the former Aston boss of the same name. So what inspired him to create the GT? ‘I’d always dreamed of making a small-volume car, a thoroughly engineered thing rather than just coachbuilt,’ he told evo. ‘With modern technologies such as plastic printing and CNC machining, it’s become possible.’ Are Eagle and Singer his inspiration? ‘Yes and no – they’re slightly different. I love what they do but I think our car will be more useable.’

The story that led to the 2+2 Speedback is an ill-fated classic car rally, when a hired Peugeot 106 proved more pleasant than a friend’s recalcitrant Ferrari Daytona. ‘I’ve been on classic car events and you can get a ton of fun out of them, but not many people have a wife or girlfriend along and most people don’t spend their evenings in nice restaurants – they’re underneath their car,’ said Brown. He reckons the combination of a classic shape without a constant need to fix things will appeal to far eastern markets in particular.

The XKR’s combination of a 503bhp supercharged 5-litre V8 engine and a six-speed automatic gearbox is described by Brown as one of his ‘all-time favourites’, and while the numerous versions of the XK – from the naturally aspirated base model to the wild XKR-S GT – offer the chance for Brown’s customers to choose something different, he is keen that his vision for the car isn’t too heavily altered: ‘I wanted a lazy drive and lots of torque and grunt – discretionary performance. I do like to think of this as a gentleman’s grand tourer – it’s not a trackday car.’ A picnic bench that neatly retracts from the boot – originally an intern’s idea – rams this point home.

The Speedback took its public bow at the Top Marques show in Monaco in April, and the public reaction it gathered will help shape where the firm goes next. Brown can see other models joining the GT: ‘The ethos of what we’re creating has a lot of future. The Britishness of the product is something I’d want to keep. There are other platforms out there I’d want to use. If we can have a little innovation mixed with traditional craftsmanship, I’m happy.’